London: Protesters marched behind a banner reading "Talib has not changed", while others held signs bearing slogans like "stop killing Afghans" and "stop the oppression of Afghan women". 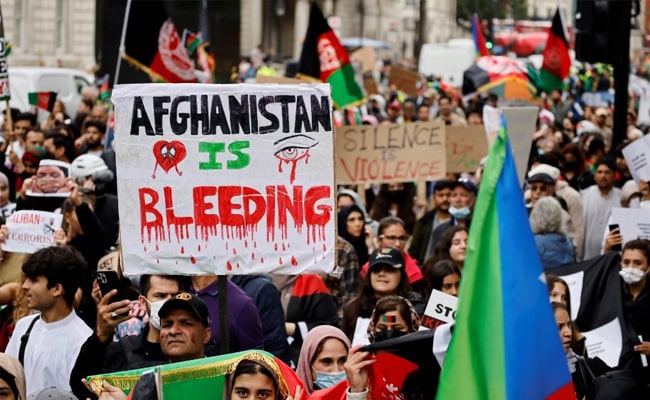 Thousands rallied in central London on Saturday to protest the takeover of Afghanistan by the Taliban and show solidarity with Afghans opposed to the new regime in Kabul.

Several thousand people descended on the centre of the British capital from lunchtime, massing in Hyde Park and marching down Whitehall past Downing Street, the residence and office of Prime Minister Boris Johnson.

The UK leader has faced stinging criticism this week over his government's handling of the crisis in Afghanistan, as Britain, the United States and other Western allies struggle to evacuate their citizens and others from Kabul.

Protesters at the London event marched behind a banner reading "Talib has not changed", while others held signs bearing slogans like "stop killing Afghans" and "stop the oppression of Afghan women".

Many attendees also waved the black, red and green national flag of Afghanistan and chanted slogans opposing the Taliban takeover.

The Taliban has insisted it will treat women fairly and not seek retribution against Afghans who cooperated with Western forces during their two-decade involvement in the country, as thousands try to flee from Kabul amid chaotic scenes.

Many Afghans and others, including those demonstrating in London, are highly sceptical about their reassurances amid reports that terrorists have already begun violent reprisals against people on so-called blacklists.