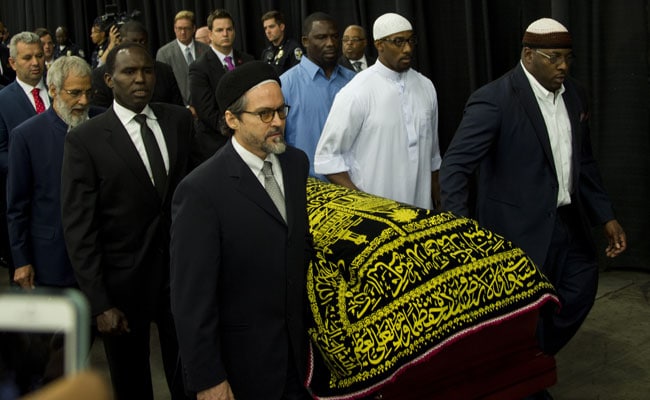 Two days of funeral ceremonies bidding farewell to Muhammad Ali got underway Thursday with a Muslim prayer service in the Kentucky hometown of the beloved boxing legend and civil rights hero.

Thousands of people stood in the cavernous Freedom Hall arena in remembrance of one of the 20th century's most singular personalities, who died last week at age 74.

People in the crowd held up their cell phones to snap pictures as the coffin holding Ali's remains moved by.

The brief ceremony in Louisville launched two days of interfaith tributes -- bringing together VIPs and ordinary fans -- to a man known for both his tenacity in the ring and his social activism outside of it, on behalf of African-Americans and social causes at home and around the world.

The three-time heavyweight world champion died after a decades-long battle with Parkinson's disease.

At the funeral service, Muslim men and women prayed in separate rows, most of the latter with their heads veiled. 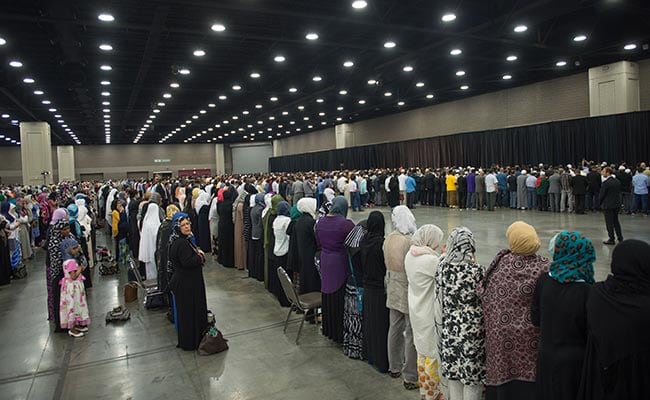 Guests and worshippers arrive at an Islamic Janazah service for boxing legend Muhammad Ali at Freedom Hall on June 9, 2016 in Louisville, Kentucky.

One of those paying his respects was Babacar Gaye, a 54-year-old native of Senegal who remembers watching Ali fights at a house in Dakar when he was an adolescent.

"There would be at least 60 people watching it on a small black and white television," Gaye told AFP.

Born Cassius Clay at a time of racial segregation in the American south, the boxer converted to Islam in 1964, changing his name to Muhammad Ali and shocking America.

Thursday's prayer service was held at the site of Ali's last fight in his hometown, where he defeated Willi Besmanoff on November 29, 1961.

"The service is a traditional Muslim funeral," Imam Zaid Shakir, who helped organize it, said earlier.

"Muhammad Ali has a very, very special significance for the Muslim community," he said.

"This is about... sending him off in the very best of fashion, and honor his memory, live his legacy and love each other as he would wish."

For millions of Muslims around the world, Ali symbolized the true face of Islam, promoting peace and tolerance.

On Friday morning, a funeral procession will wind through the city of 600,000, passing sites that were important to Ali: his childhood home, the Ali Center, the Center for African American Heritage -- which focuses on the lives of blacks in Kentucky -- and, of course, along Muhammad Ali Boulevard before arriving at the cemetery for a private burial.

Actor Will Smith -- who earned an Oscar nomination for his portrayal of Ali on the silver screen -- and former heavyweight champion Lennox Lewis will be among the pallbearers.

An anonymous individual has pledged to cover the path to the grave with red rose petals.

The Ali family asked news media not to film the burial from helicopters. 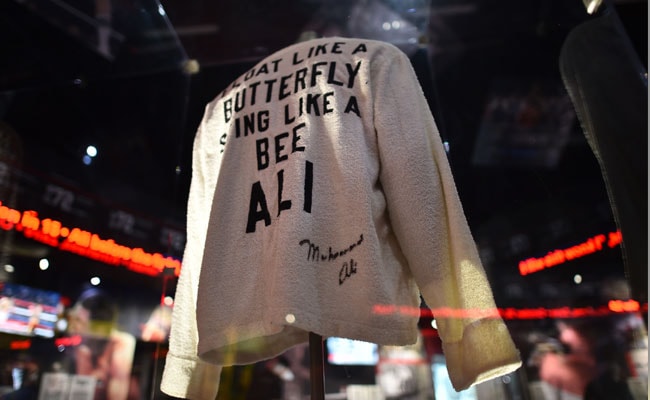 A Jester's Robe signed by Muhammad Ali is exhibited at the Muhammad Ali exhibition entitled 'I Am The Greatest', at the O2 Arena in London on June 9, 2016.

"Please use discretion and we will encourage you not to film the burial service from afar, from your helicopters flying over the cemetery," family spokesman Bob Gunnell told a press conference Thursday.

On Friday afternoon, Ali will be honored at an interfaith memorial service at a large sports arena that will bring together heads of state, VIPs and fans alike. More than 15,000 people are expected to attend.

Ali visited Istanbul in 1976 and met with Erdogan's long time mentor, then-deputy prime minister Necmettin Erbakan. During that visit Ali announced his retirement from the ring to focus on propagating the Muslim faith, but he ended up fighting for a few more years.

"Muhammad Ali was not just a champion athlete or a boxing legend. He was also a freedom fighter who threw his punches for all the oppressed people in the world," said Erdogan, according to the state-run Anatolia news agency.

"Every punch Muhammad Ali threw, every word he said, every victory he won gave hope and strength to billions of oppressed people from Asia to Africa," he said at Ankara airport late Wednesday before leaving for the United States.

The free tickets to the memorial service were given out in half an hour and a black market for the coveted tickets soon sprouted online.
Comments
Muhammad AliMuhammad Ali funeralMuhammad Ali dies