This Mock Pandemic Killed 150 Million People. Next Time It Might Not Be A Drill

By the end of the exercise, failure to develop a vaccine within 20 months had led to 150 million deaths globally, or about 2 percent of the world's population. 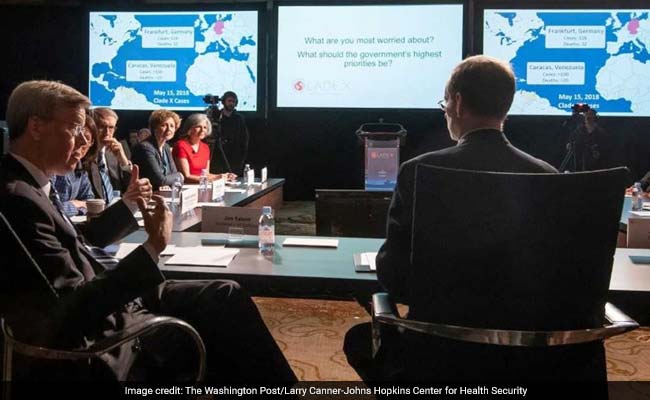 A novel virus, moderately contagious and moderately lethal, has surfaced and is spreading rapidly around the globe. Outbreaks first appear in Frankfurt, Germany and Caracas, Venezuela. The virus is transmitted person-to-person, primarily by coughing. There are no effective antivirals or vaccines. American troops stationed abroad are infected. Now the first case to reach the United States had been identified on a small college campus in Massachusetts.

So began a recent daylong exercise hosted by the Johns Hopkins Center for Health Security. The simulation mixed details of past disasters with fictional elements to force government officials and experts to make the kinds of key decisions they could face in a real pandemic.

It was a tense day. The exercise was inspired in part by the troubled response to the Ebola epidemic of 2014, and everyone involved was acutely aware of the very real and ongoing Ebola outbreak spreading in Congo.

In the simulation, a bipartisan group of current and former high-ranking U.S. government officials played a team of presidential advisers faced with a host of real-world policy, political and ethical dilemmas. The actors included former Senate majority leader Tom Daschle, D-S.D., who played the Senate majority leader, and Rep. Susan Brooks, R-Ind., who played herself. They had to react as the outbreak unfolded according to a script provided by Johns Hopkins, with no advance knowledge about how the mock disaster would play out.

They faced difficult questions throughout the exercise: Should the United States impose a travel ban on flights from Germany and Venezuela? If not, they faced the problem of explaining that decision to the American public and Congress in the face of political pressure to act. Should the United States send troops to Jordan, where a major outbreak has occurred and the key Middle East ally is requesting assistance? Once a vaccine is developed, who should get it first? Should priority go to officials, to ensure continuity of government, or to children and pregnant women? Or should there be a lottery?

There were no easy answers. That was the point of the day-long exercise, held in a darkened hotel ballroom before a rapt invitation-only audience of about 150 people and livestreamed on Facebook. There were experts from academia and think tanks, and officials from across the U.S. government, including the White House, defense and intelligence communities, health and security agencies and Congress.

Tom Inglesby, director of the Johns Hopkins center, said the purpose of the exercise was to "provide experiential learning" for new decision-makers in the Trump administration. But many of the hard issues have remained unresolved for several administrations.

"There are a lot of moving pieces in the world of pandemic preparedness at the moment," he said. Chief among those issues, he said, are questions about the extent of U.S. support for global health issues and the role of the national security community.

Even though many players in the scenario had decades of experience in health security and national and global policy and law, "there were still so many unanswered questions and capability gaps," said Beth Cameron, formerly senior director for global health security and biodefense at the National Security Council under President Barack Obama. Cameron, who was in the audience, is vice president for global biological policy at the Nuclear Threat Initiative.

If the fictional outbreak, or one even less deadly, emerged tomorrow, she said, "we would be facing the scenario with a new Cabinet untested by a major outbreak."

Unlike Ebola, which spreads through direct contact and bodily fluids, the "Clade X" virus in the Johns Hopkins simulation was a flu-like respiratory virus, which would spread far more easily from person to person through coughing and sneezing. That's how the 1918 influenza pandemic spread. It killed more than 50 million people and is the deadliest pandemic in history. (If you ask infectious disease experts what they fear most, without fail they answer: "pandemic influenza.")

The fictional outbreak kept getting worse. It had a 10 percent fatality rate, about the same as the SARS virus that traveled around the world in 2002-2003. Because the virus in the drill was new, no one had previous immunity to it, and it spread quickly in large cities. As it killed more than 100 million people globally, health-care systems collapsed, panic spread, the U.S. stock market crashed, and the president, members of Congress and the Supreme Court were incapacitated.

"We didn't want to have a Disney ending," Inglesby said. "We wanted to have a plausible scenario. We did know it would be jarring."

Over the course of the day, the 10 experts played the roles of U.S. officials in a series of simulated National Security Council-convened meetings. They acted the parts of a national security adviser, the secretaries of health and human services, state, homeland security and defense, attorney general and the directors of the Central Intelligence Agency and Centers for Disease Control and Prevention. There were also two members of Congress. Inglesby played the national security adviser.

The advisers were asked to give recommendations to a fictional president (who remained offstage). They received briefings and news reports as the exercise progressed. Their consensus advice was repeatedly ignored and overridden by the president for short-term political reasons.

In real life, NSC meetings would not include members of Congress. But the political leaders consistently highlighted the political pressures and the need to communicate tough policy decisions effectively, in the judgment of health security experts who watched the exercise.

The fictional outbreak was revealed to be a virus engineered in a Swiss lab by a terrorist group. In another grabbed-from-the-headlines twist, the terrorists had inserted deadly genes from the Nipah virus, a rare brain-damaging virus. In real life, a Nipah outbreak in southern India has killed at least 13 people this month. In the exercise, schools closed, the demand for surgical masks and respirators far exceeded supply, and hospitals in the United States were quickly overwhelmed - just as many were by a bad flu season this year.

When the players were informed that the virus has spread to Bethesda, Maryland, part of the terrorists' plan to sabotage the National Institutes of Health, there was an audible groan from the audience.

There was universal agreement among the players on the need for a single senior official to coordinate federal agencies' responses and weigh the sometimes competing interests of health security, politics and foreign policy. The person needed to be above the agencies and have the ear of the president.

As panic spread and riots took place, Brooks, the Indiana congresswoman, said: "We have to have someone working on this day in and day out.... I have advocacy groups lining up and coming in one after another. They want vaccines to be prioritized.... They do not understand what's going on."

The Johns Hopkins pandemic exercise, as some of the audience members noted, took place one week after the top White House official responsible for leading the U.S. response in the event of a deadly pandemic left the administration and the global health security team he oversaw was disbanded under a reorganization by national security adviser John Bolton.

By the end of the exercise, failure to develop a vaccine within 20 months had led to 150 million deaths globally, or about 2 percent of the world's population. Players underscored the need for the United States to "go from bug to drug faster," said Jim Talen, a former Republican senator from Missouri who played the defense secretary.

Added Tara O'Toole, a former top Homeland Security Department official who played the homeland security secretary: "We are in an age of epidemics, but we aren't treating them like the national security issues that they are."

One aspect that deserved more attention, participants and experts said, was the need for officials to be proactive on social media to counter misinformation.

Promoted
Listen to the latest songs, only on JioSaavn.com
"With social media and 24-hour cable and an environment in which experts and the value of science is increasingly questioned, we just can't assume in a crisis that we can get up and talk to the American people," said Margaret Hamburg, a former commissioner of the Food and Drug Administration, who played the health and human services secretary. Otherwise, she said, "it's an environment where one thing that goes out in the media can suddenly mushroom, and before you know it, everything you're doing in the most scientific way can be derailed."