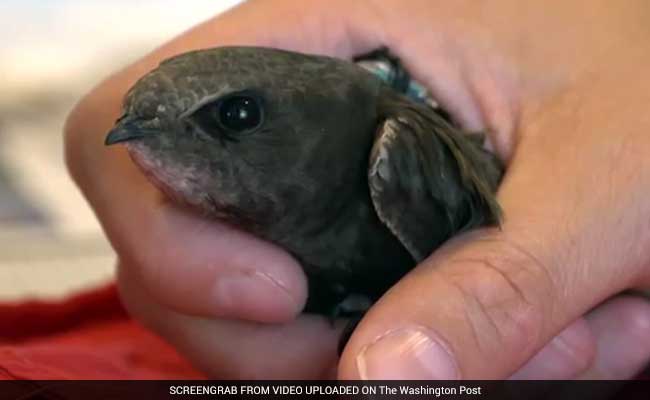 Common swifts are capable of flying for 10 months without once touching land.

The common swift is "the greyhound of the sky," Anders Hedenstrom says. Shaped like a torpedo, with long, blade-like wings, it effortlessly swoops and soars through the air, riding the wind like a creature out of mythology. For millennia, bird lovers have admired its aerial agility and seemingly endless flight.

But even the most ardent ornithologists were amazed to learn that common swifts are capable of flying for 10 months without once touching land - a world record for time on the wing.

"It's the most extreme example [of nonstop flight] that we know of," says Hedenstrom, a biologist at Lund University in Sweden and lead author of a study published Thursday in the journal Current Biology examining common swifts' astonishing abilities.

Hedenstrom and his colleagues spent two years tracking 13 swifts via tiny light sensors and accelerometers loaded into backpacks they attached to the birds. The light sensors allowed them to geolocate the birds by tracking the time of sunrise and sunset. The accelerometers tracked the beating of the swift's wings and the speed of their forward movement, so scientists could calculate how far and fast the birds were traveling and the amount of time they spent on the ground.

The data revealed that common swifts - which make a 10-month journey from Northern Europe to Central Africa and back each year - spend 99.5 percent of their migration in the air. When they did touch down, on a tree branch or patch of ground, it was only for an hour or two. Then back into the air to continue their marathon journey.

Three of the birds never landed at all. Instead they spent their entire migration aloft, traveling more than 10,000 miles without rest. No other migratory bird - not even the tenacious frigate bird, which spends weeks on the wing during long ocean crossings - is known to spend so long in the sky.

Common swifts must do everything they need to survive while aloft. They mate in the air and consume airborne insects. They drink by gliding over smooth water and dipping their beak in to take sips. It's assumed that they even sleep while in flight - Hedenstrom's study found that the birds ride updrafts to extremely high altitudes at dawn and dusk, and it's possible that they nap while drifting downward. But no one has documented this, so scientists can't say for sure.

The birds are members of the ancient bird lineage Apodidae, which may extend as far back as the Cretaceous Period more than 65 million years ago, and they are perfectly evolved for flight. Their long, narrow wings are adapted for maneuverability and for soaring long distances on currents of air and a single flap. Their bodies are streamlined and their crescent-shaped tails can be manipulated for extra efficiency.

But they fare poorly on land. The birds' legs are so short that ancient observers thought they didn't exist at all (their scientific name, Apus apus, literally means "no foot" in Greek). Young swifts are unable to take off from flat ground - they have to drop out of trees and then soar upward. Hedenstrom believes that this may explain their penchant for staying airborne: The birds are simply more at ease in the sky. Not to mention safer from predators, parasites and other threats.

Physical adaptations aside, swifts' ability to fly for months at a time remains a biological enigma.

"Flight is very energetically costly," Hedenstrom says. "To lead a life in the fast lane, so to speak, that would be associated with low survival. But the swifts are actually the opposite: They live for very long life spans for birds of their size" - tiny swifts that weigh less than a clementine live for an average of 5 and as many as 20 years, and their accumulated mileage is equal to seven journeys to the moon and back.

"They can disprove this 'live fast, die young' concept we have in biology," he adds.

Scientists know that rapid energy consumption and high workloads usually compromise mammals' immune systems, making them more vulnerable to predators and disease. It's possible they have physiological adaptations that strengthen their immune systems - something that biologists from all fields would be eager to know about.

"It's going to be fascinating to learn more," Hedenstrom says.