The World's First Fossilized Dinosaur Brain May Have Been Found 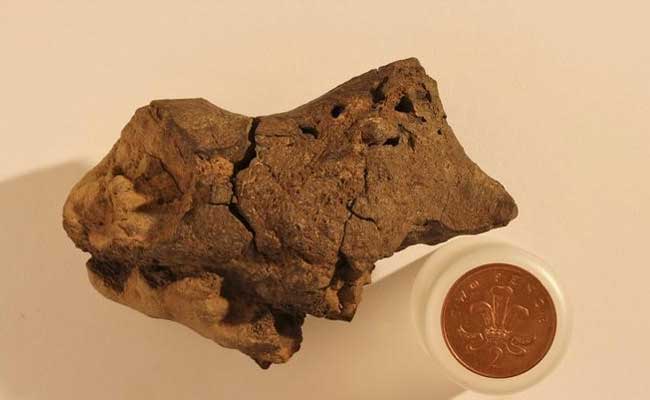 A bit of lumpy brown rock no bigger than an orange could be the world's first fossilized dinosaur brain.

The 133-million-year-old specimen came from the skull of an Iguanodon, a genus of large, iconic herbivores that lived during the Jurassic and Cretaceous periods. Scientists say the innocuous rock contains wrinkles, tubes and folds that are actually fossilized forms of the meninges (the tough cushioning tissue that surrounds the brain), blood vessels and gray matter.

"They've been replaced almost cell for cell by mineral crystals, which have taken the shape and morphology of the original structures," said Alex Liu, a paleontologist at the University of Cambridge who worked on the fossil.

It's incredibly rare to find preserved soft tissue from ancient creatures - flesh and blood are the first things to decay after an animal dies - and no scientist has ever uncovered a fossil brain from a dinosaur. The new specimen raised some eyebrows when it was presented Thursday at the annual meeting of the Society of Vertebrate Paleontology.

But Liu and his colleagues say that, after a decade of examining the brown stone, it's the best interpretation they can come up with for the intricate, delicate structure.

"The wrinkles and folds and pits and grooves ... the tubular structures that look like blood vessels - those are very difficult to explain in any other way," Liu said.

The rock was uncovered by fossil hunter Jamie Hiscocks, who caught it in the glow of his flashlight one night while prowling a British beach after a storm. The tiny specimen, which is rusty brown with oxidized minerals, immediately jumped out at him. It looked like an endocast - a fossil that forms when rock fills in the empty space in a dinosaur's skull, creating a mold of the cavity where its brain once was.

Hiscocks brought the fossil to University of Oxford paleobiologist Martin Brasier, who confirmed his suspicion. But Brasier also noticed something else: a network of fine corrugations and wrinkles on the surface of the rock that couldn't have formed from geologic processes. Closer examination with a scanning electron microscope revealed that the wrinkles actually looked similar to the fibrous bundles that surround modern bird and reptile brains. It also revealed tiny branching tubes running through the outside of the rock into a secondary layer that was folded and pitted - just like the gray matter of the cortex.

Brasier was an expert in the unlikely preservation of ancient material - in 2011, he reported the discovery of what could be fossilized cells in 3.4 billion-year-old rocks from Australia. Under the right conditions, he knew, structures as delicate as brain cells can be preserved.

He reached out to David Norman, an expert on the Iguanodons that roamed what is now the British coast, and asked for his advice. Did the fossil definitely come from a dinosaur, and if it did, how should he interpret these unusual structures?

The University of Cambridge paleontologist fit the rock into a mold of an Iguanodon skull: "It fit perfectly," he said.

The two scientists spent several years debating what the fossil really represented. Brasier said he believed that the rock could contain more preserved tissue from deep with the brain, while Norman was more skeptical. Finally, in late 2014, Norman sent a lengthy letter explaining his interpretation of the rock.

But he never heard back from Brasier. The paleobiologist was killed in a car accident on Dec. 16, 2014.

Brasier's death lent some urgency to the project: Norman and Liu wanted to get the research published to honor their friend and colleague. One day, while looking through Brasier's notes, Liu came across the letter Norman had written.

"Martin had gone through it with a fine-tooth comb, and at each point he had written 'agreed.' Agreed, agreed, agreed," Norman said. "He had come around to thinking the same way."

Liu took the fossil to the Natural History Museum in London, where CT scanners confirmed the suspicion that only a thin layer of brain tissue had been preserved. The inner part of the rock is full of rubble, twigs, leaves and chunks of charcoal.

"Then we needed to explain why and how," Norman said.

Based on the fossil's chemistry and orientation, he and Liu said they thought it formed when a dinosaur fell headfirst into a pool of very acidic water. The animal's skull would have formed a bowl in which the brain collapsed, and the low-oxygen environment would have delayed the decay of the tissue long enough for it to become pickled in the dinosaur's own bodily fluids.

"That was very fortunate, because it provided a template upon which minerals could then be deposited," Norman said. Over time, the very bottom layer of cells was turned to stone, while the rest of the brain decayed away and was replaced by sediment and other material.

The scientists' paper on their research is to be published in a special issue of the journal Earth System Evolution and Early Life dedicated to Brasier. "I hope he's smiling now," Norman said.

The discovery doesn't substantially change what we know about the Iguanodon brain; it mostly confirms conclusions already drawn based on comparisons to modern birds and reptiles. But Liu said it should alter how paleontologists handle endocasts.

"People haven't been looking for soft-tissue preservation on their margins," Liu said. "We should go back into collections and see if we can find more examples and perhaps even a better preserved specimen."

Other scientists aren't so sure, including Mary Schweitzer, an evolutionary biologist at North Carolina State University and the North Carolina Museum of Natural Science who has pioneered the study of preserved dinosaur soft tissue. Schweitzer, who attended Norman's presentation on the fossil at the SVP meeting Thursday, said she doesn't think the researchers have sufficiently explained why the brain would have been preserved without the skull in which it rested.

"The idea that you can have a brain preserved without any kind of surrounding bone is really hard for me to accept," she said. "And I think the other possibilities have not been eliminated."

The paper's publication is just the first step toward confirming the analysis by Norman, Brasier and Liu. Hiscocks and Norman are working to get the fossil into a publicly accessible museum collection, where other researchers can scrutinize it.