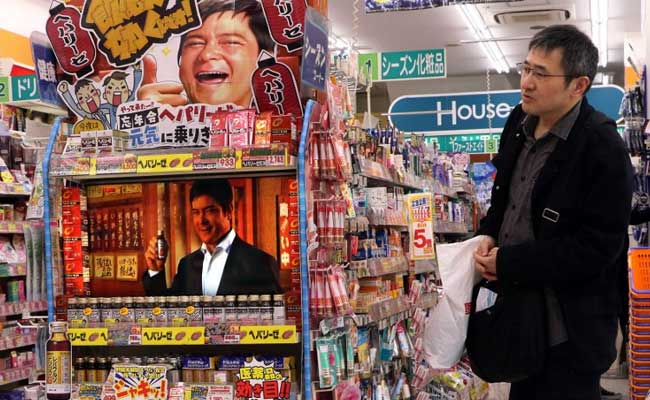 A man looking at a display for Zeria Pharmaceutical's turmeric and liver extract drink Hepalyse to cure hangovers at a drugstore in Tokyo. (AFP Photo)

Tokyo: Makoto Yamauchi is taking comfort in a dizzying array of hangover cures, from clam elixirs to turmeric tonics, as Japan's new year party season gets into full swing.

The bottled drinks are a multi-million-dollar business in Japan and 'tis the season for recovery tonics as millions turn up to Shinnenkai gatherings to ring in 2016 with frosty mugs of beer.

"I buy them about 10 times a month," he added, on his way to a boozing session with friends in Tokyo's bustling Ginza district.

Convenience stores across the nation are stocking up on top-selling Ukon no Chikara, whose faithful believe that gulping down the 205 yen ($1.70) turmeric-based recipe before a night out will make the next day a breeze.

Turmeric is thought to work as an antioxidant and anti-inflammatory aid.

Others swear by clam- and watermelon-infused tonics or the peculiarly named Pocari Sweat -- Japan's cloudy, citrus-like answer to Gatorade.

The reputedly dreadful tasting Solmac, a mixture that includes leaf extracts, turmeric, ginseng and liquorice, is also said to do the trick.

For the day after, Japanese soul food like miso soup or sour pickled plums are popular to help replace all those lost electrolytes.

The market for liver-rescuing drinks is estimated to be worth about $178 million this year, although the numbers have been declining as Japan's fast-ageing population get on the wagon. 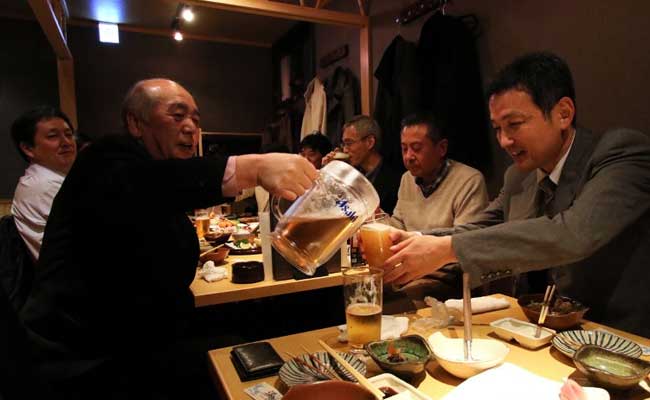 Bottled hangover cures are a multi-million-dollar business in Japan and 'tis the season for recovery tonics as millions turn up to "shinnenkai" gatherings. (AFP Photo)

As part of a broader health drive, Daiwa Securities, one of the nation's biggest brokerages, is advising more than 13,000 domestic employees to take it easy on the sake and holiday food this year.

Still, Japan's ubiquitous Izakaya pubs are packed and slumped-over salary-men remain a common sight on subways -- prompting animated public service warnings about the dangers of a boozy tumble onto the tracks.

Zeria Pharmaceutical is expecting to chalk up big sales of its liquid and pill-based Hepalyse this holiday season, after rolling out the liver tonic in convenience stores four years ago.

"People find it easier to go to a convenience store rather than the pharmacy and it has also helped brand awareness," a company spokesman said.

"One key feature of the Japanese market is that there's a high demand for drinks to recover from situations that are bad for your health, such as a hangover," Yokoyama said.

"When you look at Japan from a global perspective, supplements don't sell so well. But consumers want something to recover their health by replenishing their nutrition through drinks," he added.

"These drinks are good for office ladies -- I buy the ones with fewer calories on nights when I plan to drink a lot," she said.

"They are excellent for turning a hard landing into a soft landing."