The Plot To Assassinate America's First President - How It Was Foiled

It's easy to wonder, though: What if the plot had succeeded? Would we all be drinking British tea at work instead of observing Presidents Day? 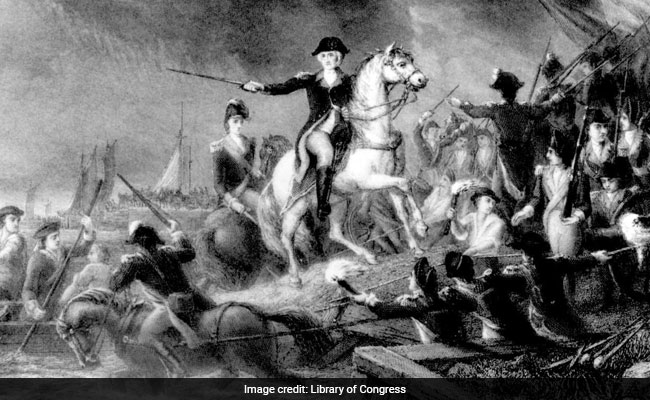 Illustration shows George Washington escaping New York, weeks after a plot to assassinate him was foiled.

It was the opening overture of the Revolutionary War. Boston had ditched its tea, Thomas Jefferson was finishing up the Declaration of Independence, and George Washington had brought the ragtag Continental Army to New York, where a British invasion was expected at any moment.

And if all went as New York's governor planned, Washington would soon be dead.

That's according to thriller writer Brad Meltzer, who, with Josh Mensch, has written his first nonfiction book, "The First Conspiracy," about a little-known plot to assassinate the commander-in-chief.

"We love in America to tell the story of the American Revolution where we just all held hands together, dreamed of democracy and took on the British," Meltzer says. "It's a great story. It's not the real story."

There was no polling data then, but historians estimate that in the summer of 1776, about one in five white colonists were loyal to the king. Most loyalists were in the middle colonies of New York and New Jersey, and included New York's royal governor, William Tryon.

Tryon had been forced into a strange exile onboard a ship docked in the New York harbor, where he waited for the British invasion and took regular visitors. One of those visitors was David Mathews, the loyalist mayor of New York City. Together, they worked on a way to help the British from behind enemy lines.

Obviously, the two would need help to pull off something so huge, and it was Mathews's job to recruit conspirators. He got at least four of them from Washington's elite "Life Guard," a sort of proto-Secret Service responsible for protecting the commander-in-chief.

So how was the plot foiled? By the loose lips of one of the lowest conspirators in the chain.

Thomas Hickey was a young Irishmen who had defected from the British army to the American side, and who, probably because of his military experience, ended up on the Life Guard. Hickey was arrested on an unrelated charge of passing counterfeit money, and while in jail, boasted to other prisoners about the plot, a transcript of his mutiny trial shows. One of the prisoners alerted authorities.

A court martial was quickly assembled. At least one of his fellow shipmates in on the plot testified against Hickey to save his own neck. Hickey was found guilty of mutiny, sedition and treachery and sentenced to die. He was hanged on June 28, 1776, in what is now Manhattan's Bowery neighborhood, before an audience of 20,000 people. At the time, it was the largest public hanging in the continent's history.

Washington required his men to attend the execution, and in a letter to John Hancock, which Meltzer highlights, wrote: "I am hopeful this example will produce many salutary consequences and deter others from entering into the like traitorous practices."

For reasons unknown, none of the other conspirators appear to have paid a price. Mathews was arrested in his home in the middle of the night but escaped before he could be hanged. And once British troops invaded and occupied New York, Tryon fought alongside them before returning to England at the end of the war.

It's easy to wonder, though: What if the plot had succeeded? Would we all be drinking British tea at work instead of observing Presidents Day?

Meltzer thinks it's possible the Americans still could have won the war. After all, Washington was never the greatest military tactician; a replacement may have done as good or better a job. But, he says, the real damage to the young nation would have been done if Washington hadn't been the first president - a president who voluntarily stepped down after two terms.

"When the war is over ... he was so popular that he has the opportunity to be America's first king," Meltzer says. "But he instead steps away from power and decides to have faith in us as a country and faith in us as a people. I don't know if you can find anyone else like that. That's where I feel like all of history changed."

(Except for the headline, this story has not been edited by NDTV staff and is published from a syndicated feed.)
Comments
George WashingtonAmerica's First President