In chilly waters on either side of Greenland, the ocean circulation "overturns," as surface waters traveling northward become colder and more dense and eventually sink, traveling back southward toward Antarctica at extreme depths. 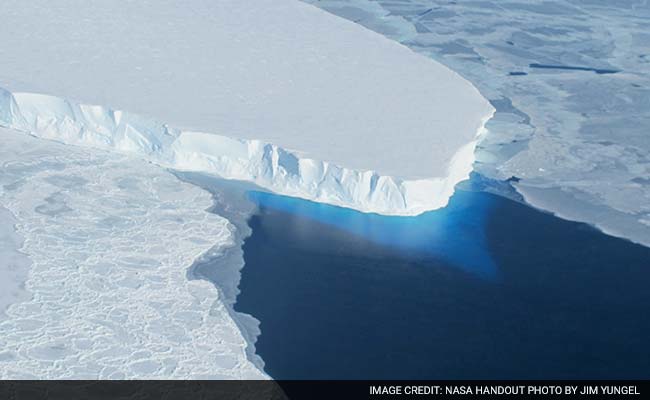 The key processes have raised long-standing concern are already happening.

Scientists studying a remote and icy stretch of the North Atlantic have found new evidence that fresh water, likely melted from Greenland or Arctic sea ice, may already be altering a key process that helps drives the global circulation of the oceans.

In chilly waters on either side of Greenland, the ocean circulation "overturns," as surface waters traveling northward become colder and more dense and eventually sink, traveling back southward toward Antarctica at extreme depths. This key sinking process is called convection. But too much fresh water at the surface could interfere with it because with less salt, the water loses density and does not sink as easily.

In the new research, Marilena Oltmanns and two colleagues at the GEOMAR Helmholtz Center for Ocean Research in Kiel, Germany, found that following particularly warm summers in the remote Irminger Sea, convection tended to be more impaired in winter. In some cases, a layer of meltwater stayed atop the ocean into the next year, rather than vanishing into its depths as part of the overturning circulation, which has sometimes been likened to an ocean "conveyor belt."

"Until now, models have predicted something for the future . . . but it was something that seemed very distant," said Oltmanns, the lead scientist behind the research, which was published this week in Nature Climate Change.

"But now we saw with these observations that there is actually freshwater and that it is already affecting convection, and it delays convection quite a lot in some years," she continued.

One caution is that this is an observational study, not a prediction for the future - and Oltmanns said "nobody really knows" how much freshwater is enough to significantly slow or shut down the circulation, which is technically called the "Atlantic meridional overturning circulation," or AMOC. Still, it suggests that key processes that have raised long-standing concern are already happening.

To collect the data, Oltmanns and her team ventured by ship out into the Irminger Sea to the southeast of Greenland. There, they read data from ocean moorings that take measurements of the character of the waters in key regions of ocean convection. The researchers now have a 13-year record to draw upon from this area.

In winter, cold air chills the northward-flowing surface water in this region enough to cause it to become denser and sink. But meltwater interferes with and delays this process because, lacking salinity, it is less dense and so less prone to sink.

In the high meltwater years, the ocean is also just warmer overall, the study found. That also delays the onset of convection because it is harder for the ocean surface layer to lose enough heat to sink, Oltmanns said.

Either way, these processes create a situation in which meltwater may not sink entirely below the surface - instead, it can linger. This then creates the possibility that, lasting through the winter, it could join up with even more meltwater the following summer.

The study found that in one year, 2010, 40 percent of fresh meltwater managed to linger in the Irminger Sea over winter and into the next year.

Again, it's important to underscore that there are no predictions in this study about when these processes would actually reach such a threshold or cause a major switch to a new regime. Climate change simulations have generally found that while global warming should indeed weaken the Atlantic overturning circulation, that should play out gradually - but scientists acknowledge that these simulations are not necessarily complete.

That's why data gathering, as in the current study, also matters a great deal.

"As we explore the crucial impact of freshwater discharge from Greenland and other venues on the ocean circulation, this paper represents an important piece in the puzzle," said Marco Tedesco, a Greenland expert at the Lamont-Doherty Earth Observatory of Columbia University, who was not involved in the study.

The research highlights the growing attention being paid to the crucial ocean circulation in question, which is responsible for bringing warm ocean water northward and therefore warming higher latitudes and Europe in particular. It has long been considered a potential weak spot in the climate system because of the possibility that a change here could trigger dramatic changes in a short time.

Scientists have reported the circulation is in a weakened state, and has been since 2008. The reduction in strength has been by about 15 percent, David Smeed, a scientist who studies the strength of the circulation at the U.K.'s National Oceanography Center in Southampton, told The Washington Post this year.

But what's behind changes this region is less clear, with some scientists saying that we're already seeing the role of climate change, others saying that what's going on in the North Atlantic is mainly the reflection of a cyclical phenomenon affecting the oceans and atmosphere - and many suggesting it's a combination.

"These decadal variations are likely superimposed on a longer declining trend related to increasing greenhouse gases," said Tom Delworth, an expert on the North Atlantic with the National Oceanic and Atmospheric Administration, in an email to The Post this year. "However, in terms of explaining AMOC behavior over the coming decades, the relative role of increasing greenhouse gases may well increase relative to natural variability."

That sounds pretty gradual - but the new study is saying the change doesn't necessarily have to be.

Promoted
Listen to the latest songs, only on JioSaavn.com
"There might be a threshold that is crossed and it's harder to get back to where we were before," said Oltmanns. "It's possible."