On Thursday the Arctic Council found out why US Secretary of State Rex Tillerson had refused to re-commit to the terms of Paris climate accord: President Donald Trump was about to pull the United States out of the deal altogether. 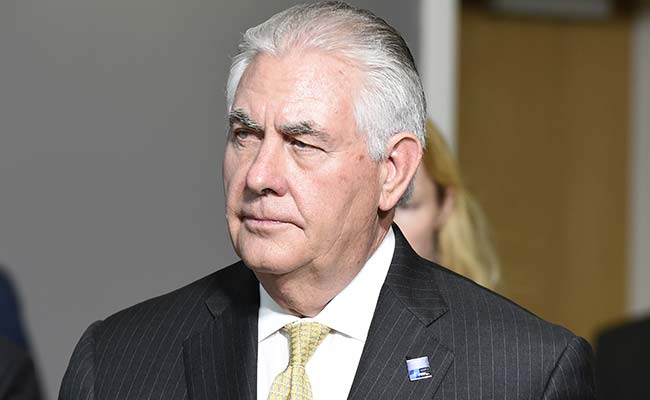 The Arctic Council who had hoped Rex Tillerson to tackle the climate issue were disappointed.

Fairbanks, United States: When ministers from the eight states of the Arctic and representatives of the region's native peoples met last month in Alaska, evidence of global warming was all around them.

Locals all had stories to tell, from the appearance of new ticks that came from the south to the boreal forest, to the subsidence caused by thawing permafrost toppling trees and undermining house foundations.

But if delegates to the Arctic Council had hoped for reassurance from their host, US Secretary of State Rex Tillerson, that his government would tackle the issue, they were disappointed.

On Thursday they found out why Tillerson had refused to re-commit to the terms of Paris climate accord: President Donald Trump was about to pull the United States out of the deal altogether.

In hindsight, the low-key gathering of foreign ministers and indigenous groups prefigured the later high drama in Washington. The United States was going it alone to the dismay of would-be friends and partners.

Passing the baton to Finland after the two-year US presidency of the council, Tillerson warned delegates that Trump was already reviewing how to "approach the issue of climate change."

In Alaska -- and in the circle of territories around the Pole in Canada, Russia and Scandinavia -- climate change is not an abstract policy matter, as delegates to the council attempted to persuade their host.

"We are connected to the land. It is who we are," said Bill Erasmus, an envoy from the Arctic Athabaskan Council, which represents a native Arctic people living on lands that span the Alaska-Canada border.

"Climate change in the Arctic is not just an environmental issue. It is a matter of culture and our rights to exist as indigenous peoples," he said.

The Athabaskan rep was joined at the council in Fairbanks by representatives from other indigenous groups from as far away as Finland and Russia -- and all told a similar story of a way of life under threat.

O. Patricia Lekanoff-Gregory was sent by the Aleut International Association to talk for a people that live and fish on both sides of the frigid, churning waters of the Bering Sea in Russia and the United States.

"We the Aleut people are resilient and adaptable. We have survived many hardships brought about by contact with the outside world," she told the meeting, complaining of ocean acidification and rising temperatures.

Global warming has altered species migration routes and triggered extreme weather events that threaten the Aleuts' salmon fishing, she said, just as subsistence hunters from inland peoples are running out of prey.

"All of these things are real and they are happening right now," she said.

She implored delegates not to "let politics interfere with the actions that must happen now and in the future."

Events like the council draw experts and community leaders from around the broader region to share ideas and steps that can be taken to adapt to life in a warming Arctic.

For example, just outside Fairbanks on a farm operated by the University of Alaska, professor Greg Finstad and his team are raising an experimental herd of reindeer with a view to building a new commercial meat industry.

Reindeer have long been farmed in Russia and Finland, and were brought from Siberia to coastal Alaska by Russian whalers.

Inland hunters are more used to seeing wild caribou, whose stocks have dwindled.

Finstad is proud of the meat as a product -- some is already added to pork and beef to make sausages popular in local restaurants -- and hopes local communities will turn to farmed reindeer as a source of protein and cash.

The US beef industry is wary of competition, however, and politics and bureaucracy make it hard for him to get his hands on the detailed research into large-scale reindeer farming carried out by the former Soviet Union.

Such small and medium-scale initiatives may help communities adapt to the march of climate change in frontline communities like rural Alaska, but local leaders had hoped for global help in slowing rising temperatures.

The two-year US chairmanship of the Arctic Council began under the former secretary of state, John Kerry, a passionate supporter of environmental causes who signed the Paris accord on behalf of the United States.

It ended under Tillerson, the former chief executive ExxonMobil, the firm that operated the Exxon Valdez supertanker which ran aground in Alaskan waters in 1989 and spilled a quarter of a million barrels of crude.

The oilman acknowledged the other delegates' keen interest in seeing the Paris accord fully implemented, but he warned: Trump would always put what he called "American interests" first.

"We are appreciative that each of you has an important point of view, and you should know that we are taking the time to understand your concerns," he said.

Three weeks later, it was clear that those concerns had not been heard.

(Except for the headline, this story has not been edited by NDTV staff and is published from a syndicated feed.)
Comments
US Secretary of State Rex TillersonUS President Donald TrumpArctic CouncilClimate change