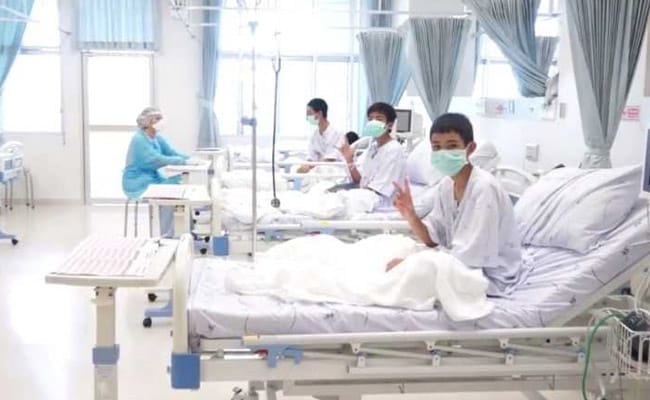 The 12 Thai boys and soccer coach who were rescued from a flooded cave will be discharged from hospital on Wednesday and hold a news conference the same day to satisfy huge media interest in their story, a government official said.

The boys, aged 11 to 16, and their 25-year-old coach were safely brought out of the Tham Luang mountain cave complex near the border with Myanmar last week after a perilous rescue operation that drew global media attention and hundreds of journalists to the scene.

The boys and their coach have been in hospital in the northern town of Chiang Rai since they were rescued.

The authorities have been concerned about the impact of sudden fame and media attention on the boys' mental health, so Wednesday's news conference will be carefully controlled.

Journalists will submit questions in advance which will be vetted by a psychologist. Approved questions will be put to the boys by a moderator.

"We arrange it so that, after that, the boys can go back to their regular lives," Sansern said.

The boys and their coach had planned to explore the cavern for about an hour after soccer practice on June 23. But a rainy season downpour flooded the tunnels, trapping them.

Two British divers found them on July 2 squatting on a mound in a flooded chamber several kilometers inside the complex. Rescuers then had to work out how to get them out through the tunnels, some of which were full of fast-flowing floodwater.

Their dramatic story is already set for a retelling by Hollywood, with two production companies looking to put together movies about the boys and their rescue.

Passakorn Bunyalak, deputy governor of the province of Chiang Rai, said the boys would be sent home after the news conference and he was requesting their parents and journalists to hold off interviews for about 30 days.

"At this early stage, we are trying to get media not to bother the boys," he told Reuters, adding that they were protected by Thailand's Child Protection Act.

An article in the act protects those under 18 from media coverage that would cause emotional and reputational injury.