"Dug Holes To Escape, Had No Food For 9 Days": Thai Boys' Survival Ordeal

In their first public appearance, the young Thai soccer players emerged holding soccer balls, dribbling them in a show of health and good spirits before detailing their weeks-long ordeal. 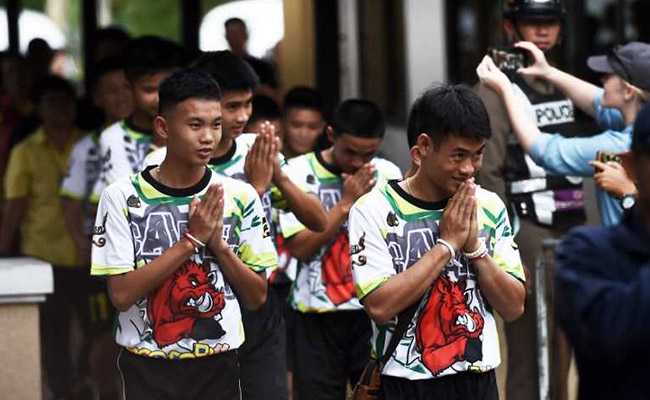 The boys will go home with their families after almost a month. (File)

With a routine of digging, breaks for water and meditation, a group of young Thai soccer players and their coach stayed alive while trapped in a cave without any food for nine days before they were found by two British divers in a remarkable search-and-rescue operation that gripped the world.

In their first public appearance since their daring and almost improbable rescue, the young Thai soccer players emerged holding soccer balls, dribbling them in a show of health and good spirits before detailing their weeks-long ordeal.

The boys, their 25-year old coach Ekapol Chanthawong said, persuaded him to bring them on a short trip into the vast cave system after soccer practice on June 23. They had no food or snacks with them, he said, planning to stay there for just an hour and be home before nightfall. None of the boys had even told their parents of their plans.

As they went farther and farther in, they used a guide rope, pulling on it twice when those at the front of the group realized they could not continue. Soon, they reached that point - and they tried to retreat. But when they attempted to head back to the cave's intersection, their only route out, they realized it was flooding.

"We found that there was water coming down and down from the rocks," said Ekapol. The team found shelter instead, prayed before sleeping that night and hoped the water levels would lower enough for them to swim out the next day.

That was the first of nine days that the soccer players and their coach had to go without food, trapped in the Tham Luang cave system in a lush mountain range in northern Thailand, close to the border with Myanmar. As the hours passed, they lost sense of how long they had been in the cave's dark chambers. Faced with a group of hungry, weakening boys, Ekapol urged them to drink water to keep full and to try to dig holes out through the cave with rocks, so that they had a sense of purpose.

"We dug holes to find a way to escape and stopped when we were tired. We kept drinking water to fill our belly," said Ekapol.

The boys ranged in age from 11 to 16. The youngest of them, Chanin Wiboonrungrueng - known by his nickname, Titan - said he soon started to feel faint and dizzy, and struggled to keep his mind off food.

"We tried not to think of food, like fried rice, because it would make us hungrier," he said.

The disappearance of the boys and their novice monk-turned-soccer-coach from the small town of Mae Sai on the Thai-Myanmar border launched an international rescue effort involving thousands of divers, rescuers, cave experts and Thai and foreign military personnel.

The plan to extract them by diving them out of the cave's flooded passageways ended with the successful rescue of all 13, who have since been recovering in a hospital. They were discharged Wednesday and will be joining their families at home, almost a month after they first disappeared.