Teens Were Throwing Eggs At Cars, US Cops Say. Now A Mother Of 2 Is Dead

The "funny and independent" mother of two had been visiting family in town for the holiday, and had planned to return to her own home that day. 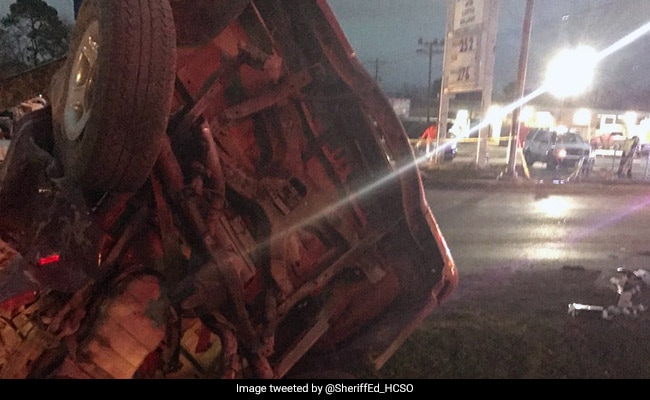 Teenagers in an SUV had been speeding around nearby streets, throwing eggs at oncoming cars.

The "funny and independent" mother of two had been visiting family in town for the holiday, and had planned to return to her own home that day, her daughter would tell ABC 13 News.

What Zavala couldn't have known as she traveled southbound on Aldine Westfield Road was that, at the same time, teenagers in an SUV had been speeding around nearby streets, throwing eggs at oncoming cars, authorities said.

The juvenile prank had caught the attention of a man driving a Lincoln, who allegedly flashed a semiautomatic handgun at the teenagers and then began chasing them, the Harris County Sheriff's Office said. The SUV - driven by a 14-year-old - sped westbound on Aldine Mail Route Road. At the intersection of Aldine Westfield, it ran a red light - and slammed into Zavala's red pickup truck.

Surveillance video from a nearby shopping center captured the moments leading up to the crash. In the footage, the red pickup truck disappears from the frame briefly as it enters the intersection. A second later, a tan SUV can be seen careening into the truck with such force that both vehicles are pushed, smoking, off the road, coming to rest near a Walgreen's parking lot.

Images of the crash site show the red pickup truck mangled on its side. Based on debris strewn at the scene, it appeared the driver of the truck had just gone shopping, Harris County Sheriff Ed Gonzalez said.

Officials said the teenage driver of the SUV, publicly identified only as a male, broke an ankle in the crash. He was charged with felony murder and booked into the Harris County Juvenile Detention Center, Gonzalez said Wednesday.

The driver has been charged as a juvenile for now, sheriff's spokesman Thomas Gilliland told The Washington Post. In Texas, only a judge can determine later, when a juvenile defendant turns 17 years old, whether to transfer the case to an adult charge, he said.

Authorities said Wednesday they had found the driver of the Lincoln who had allegedly flashed a gun at the teens and then chased them, and that he was cooperating with the investigation. That driver, whom police identified as a Hispanic male in his late 20s, has not been charged with anything, Gilliland said.

As of Thursday, the two other teen passengers in the SUV are not facing any charges; they were released to their parents at the scene, Gilliland said.

The case remains under investigation.

Meanwhile, Zavala's family is mourning the death of the mother of two and grandmother of four.

"She was about to come home and get her stuff and say bye, and she was about to leave. She couldn't say bye," Jessica Gaspar, Zavala's daughter, told ABC 13 News. "[The teen driver] did what he did. He took my mother's life so he has to pay for what happened."

(Except for the headline, this story has not been edited by NDTV staff and is published from a syndicated feed.)
Comments
Houstonrash drivingUS police