Tears, Cheers And Selfies As Climate Pact Sealed In Paris 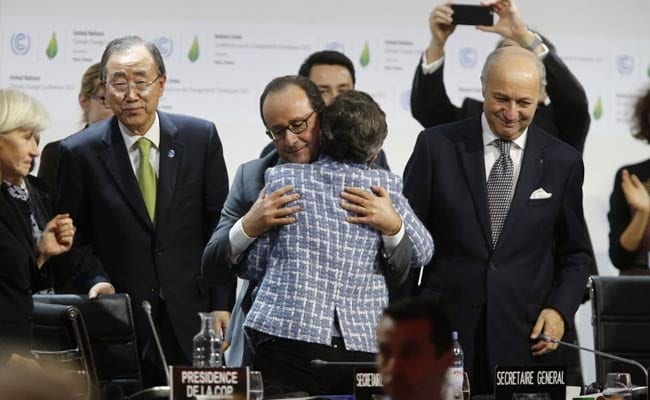 Envoys from 195 nations on December 12 adopted to cheers and tears a historic accord to stop global warming, which threatens humanity with rising seas and worsening droughts, floods and storms. (AFP)

Le Bourget, France: They erupted into cheers, broke into tears, took selfies and quoted great figures of history after the gavel came down in Paris on Saturday, launching the quest to save mankind from global warming.

The roughly 2,000 ministers, negotiators and activists in the cavernous plenary hall on the outskirts of the French capital took to their feet in a joyous uprising as their French hosts beamed onstage.

After almost three minutes of cheering died down French Foreign Minister Laurent Fabius, who presided over 13 days of gruelling talks, picked up the green leaf-shaped gavel and brought it down again.

"It may be a small gavel but it can do big things," he said, drawing more elated cries and clapping.

In bringing down the tiny hammer, Fabius sealed an agreement that French diplomats spent more than a year criss-crossing the globe and preparing with meticulous detail.
The mood in the room was celebratory even before the emotional approval of the accord, with broad smiles, back-slapping, hugs and handshakes.

Former vice president Al Gore, who co-won the Nobel Peace Prize for his work on climate change, posed for pictures and selfies with admirers.

Suspense was high right up to the end, with the session to approve the accord starting about two hours late.

When Fabius finally took the stage -- to thunderous applause -- he told the crowd: "There had been a couple questions to settle".

It turned out the negotiators, bleary after two sleepless night spent hammering out the agreement had left a few mistakes in the text. One was a whopper.

In a complex legal agreement such as the Paris accord, "shall" carries a more onerous level of responsibility. It was supposed to say "should", which does not have the same binding nature.

Pascal Canfin, a senior climate advisor at the World Resources Institute, wrote on Twitter the difference could have forced the Paris deal before the US congress for approval.

For the accord's boosters, that possibility was terrifying as the Republican-dominated legislature would have -- with near-certainty -- rejected the agreement.

Among those fighting for the accord it must have felt like deja vu, with the US failing to adopt the carbon-cutting Kyoto Protocol, which the Paris agreement will succeed when it takes effect in 2020.

But Fabius, showing the calmness that became a hallmark of the French diplomatic effort, then reassured ministers the text would be tweaked to reflect the correct language.

The final hurdle blocking the agreement dropped away.

Many ministers, who were brought in on Monday to close the deal following talks among lower-level negotiators, noted the history-making nature of the moment, referring to great figures of the 20th century, especially South African democracy hero Nelson Mandela.

"We hope that Paris will mark a new beginning where commitments made will be fulfilled," said Environment Minister Prakash Javadekar.

"It is India's hope that the Paris agreement will fulfil the wishes of Mahatma Gandhi who used to say we should care for a world we will not see."