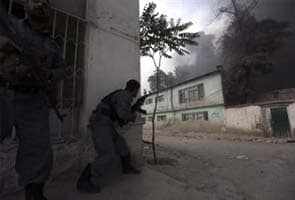 Kabul: Taliban militants launched a coordinated attack on a U.N. compound in the centre of the Afghan capital, Kabul, on Friday setting off explosions and battling the security forces.

A plume of smoke hung over the city centre after the attack was launched, eight days after six Americans, soldiers and civilians, and nine Afghans were killed in a suicide car bombing in Kabul.

Concern is mounting about how the 352,000 members of the Afghan security forces will cope with the militants after most foreign NATO-led combat troops leave by the end of next year.

There was no information about anyone who had been inside the compound at the time of the attack.

There were at least four large blasts and exchanges of fire were going on between the attackers and Afghan forces, supported by Norwegian special forces, at 6.20 p.m. (1350 GMT), witness said.

The first blast was a suicide car-bomb blast at about 4 p.m. (1130 GMT) near a main intersection, said Kabul police chief spokesman Hashmatullah Stanikzai.

He said the fighters were targeting a compound used "mostly by members of the CIA", adding that they had gained access to the compound after the first bomb.

The Taliban routinely overstate the results of their attacks.

Shooting erupted after the first bomb, with more blasts beginning about 30 minutes later.

Insurgent attacks against civilians, government workers and Afghan security forces have increased in recent weeks as the Taliban, toppled by a U.S-led force in 2001, exert increasing pressure on the Afghan government.

Fifteen people, including six Americans, were killed on May 16 in a suicide bombing by the Hezb-i Islami insurgent group, which is allied with the Taliban.

Promoted
Listen to the latest songs, only on JioSaavn.com
Last year, more than a dozen people were killed during a Taliban attack in Kabul which started with coordinated suicide attacks and led to an 18-hour long siege.