Three people were arrested, one passerby was injured by fireworks and a policeman was hospitalized with unspecified injuries, Zurich police said. 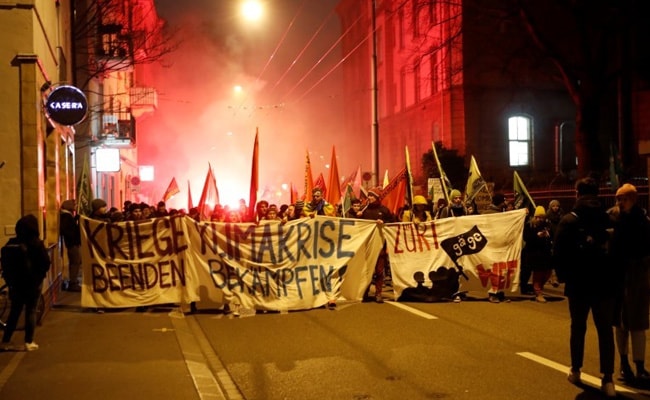 Three people were arrested, one passerby was injured by fireworks and a policeman was hospitalized with unspecified injuries, Zurich police said in a news release after the demonstration broke up mid-evening.

Several hundred people marched in the permitted demonstration entitled "Zurich against WEF" in the streets near the Swiss banking capital's downtown.

In addition to opposition to the annual confab of global business and political leaders in Davos, about 150 km (93 miles) from Zurich, that included a visit from US President Donald Trump, demonstrators called for swifter action on climate change.

Some demonstrators marched with banners proclaiming "Stop the Climate Crisis," while others ignited boxes in the middle of the street, and windows of surrounding shops were smeared with slogans including "Smash WEF."

Despite organizers calls for non-violence, police said, some of those marching ignited fireworks near crowds, including onlookers, and caused property damage in the "thousands of Swiss francs".

"Even after the end of the official event at around 20:30 Central European Time (19:30 GMT), several groups of violent people remained at the scene to keep officers busy," police said.

(Except for the headline, this story has not been edited by NDTV staff and is published from a syndicated feed.)
Comments
World Economic ForumDavosSwiss police