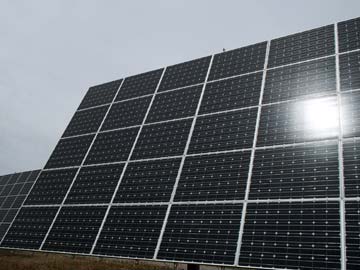 The sun is reflected in a solar panel in a field of Mahora, near eastern Spanish city of Albacete on May 7, 2014.

Albacete: "The sun could be yours," the Spanish government promised in 2007, encouraging citizens to invest in solar power. Many who did now wish they could give it back.

Tens of thousands of indebted Spaniards have found themselves lumbered with fields full of expensive solar panels whose subsidies have been unexpectedly cut in the financial crisis.

"How do I feel? Completely fooled," said David Utiel, a 37-year-old teacher who invested in a solar plant, recalling the government's sunshine slogan.

He was one of the 62,000 ordinary citizens in Spain who campaign groups say have been caught in a financial sun trap.

Along with 23 of his neighbours from Madrigueras, near the eastern city of Albecete, he jointly owns nearly 360 solar panels which stand in a field of wild grass and red poppies.

"It was the government that gave us the idea," he said, walking at the foot of the vast black panels.

"It was supposed to be a good idea to put your money in the whole solar energy thing. They said it could be very profitable."

"We are completely ordinary people, country people from the village. Some of us work in education, some in farming, others in small businesses," he said.

"The idea was not to go chasing after subsidies and become millionaires or anything like that. It was to have some kind of pension."

Spain's government is taking drastic measures to slash a 26-billion-euro electricity deficit after years of paying subsidies to keep prices down.

- Betting the farm -
"It's the government that encouraged us to invest our savings to generate solar energy," said Miguel Angel Martinez-Roca, president of ANPIER, an association of small sun power producers.

"It then started to apply retroactive cuts by law once the solar plants were already built. They changed the rules half way through the game."

UNEF, another solar energy association, estimates that since 2007 earnings by owners of solar panels have fallen by up to half in the worst cases, with losses varying according to the type of installation.

It estimated that the complex series of subsidy cuts would cost owners 920 million euros in 2014.

David, who mortgaged his house for the solar investment, has received just 3,000 euros in aid in the past six months, six times less than he pays in maintenance and loan repayments.

Another local man, Manuel Alonso Caballero, 39, left his job in the airport sector to set up his own solar power plant.

He says he invested nearly 1.5 million euros and risks losing it all. His farmer parents have had to mortgage their house as his guarantors.

"I've lost any trust I had and I wouldn't invest another euro in Spain."

ANPIER has lodged complaints in the courts against the state and vows to turn to the European Union authorities if its case in Spain fails.

Martinez-Roca said the group is calling a demonstration in Madrid on June 21 against the government.

Promoted
Listen to the latest songs, only on JioSaavn.com
"We are not prepared to let them ruin us, insult us and cheat us like this."