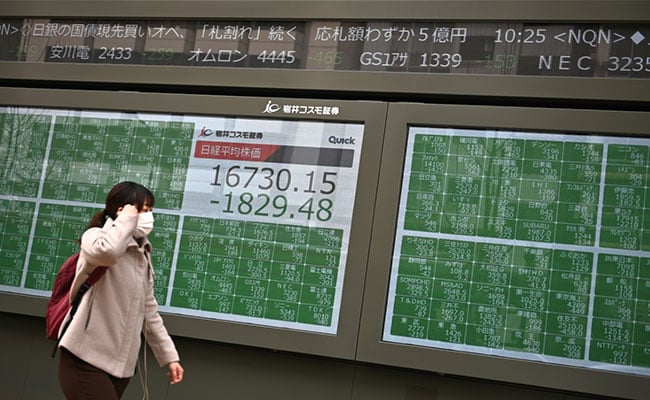 Equity markets plunged Thursday, with some recording their worst day in decades, after the US banned travel from Europe and the ECB failed to stem the selling tide.

The oil price also fell sharply as the move ramped up fears of a worldwide recession.

Markets lived through "a horror show", said Connor Campbell, an analyst at Spreadex. The travel ban was heightening "the likelihood of a global recession", he said.

Patrick J. O'Hare at Briefing.com said "all of the efforts being made to curtail the spread of the coronavirus are going to produce negative economic outcomes that will weigh far and wide".

London recorded its worst day since the 1987 crash and Frankfurt its blackest day since 1989, the year the Berlin Wall fell.

The European Central Bank ramped up its super-cheap bank lending programme and other stimulus measures, but its failure to lower interest rates sparked further selling.

Markets were also unnerved by ECB chief Christine Lagarde saying it wasn't her job to close the spread between Italian and German government bonds, which investors took as a sign that she may be underestimating the degree of stress in the eurozone financial system.

Milan stocks fell by 16.9 percent as Italy went into lockdown.

On Wall Street, the Dow tumbled more than eight percent in early trading, triggering a 15-minute suspension in trading at one point, before paring losses when the New York Fed announced a big liquidity injection into the banking system.

Projections 'out the door'

Travel and tourism have been particularly hard-hit as countries institute travel bans and quarantine requirements, with airline stocks nosediving.

The recent stock market downturn had wiped off $11.3 trillion from global valuations as of the end of Wednesday, according to Howard Silverblatt, a senior analyst at S&P Dow Jones Indices.

Oil prices were also hammered, with benchmark Brent North Sea crude losing more than eight percent as a slowing economy was expected to dampen demand for petroleum and Saudi was fuelling a price war.

"We are now staring at the whole world going into a lockdown," Vandana Hari, of Vanda Insights, said. "Oil demand can be expected to crash through the floor and all previous projections on oil consumption are now out the door."