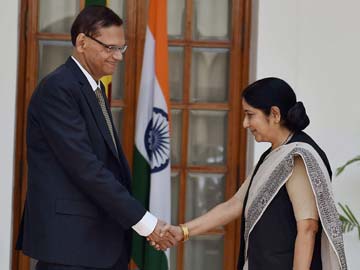 Colombo: Sri Lanka has sought India's assistance to reach a consensus among political parties on a home-grown solution to the reconciliation process of all ethnic minorities, including Tamils.

External Affairs Minister G L Peiris, addressing a gathering in the central town of Kandy following his return from India, said his engagement with his Indian counterpart Sushma Swaraj had been fruitful.

Mr Peiris was in New Delhi on Wednesday and held talks with Ms Swaraj on an entire gamut of bilateral ties.

"I apprised her on the parliamentary select committee process. I told her clearly that we were keen for a home-grown solution through the participation of all political parties. We urged Indian assistance towards this," Peiris said.

Tamil National Alliance has stayed away from the SCP, dubbing it as a time wasting exercise. The TNA wants the government to implement the agreements reached at the talks held since 2012. Sri Lanka wants India to help bring the TNA to the select committee.

Mr Peiris said one positive outcome of his Delhi visit was the Indian statement which effectively said that India stays opposed to country-specific action by international bodies.

This was a reference to India's abstention at the Sri Lanka resolution which called for an international investigation into the country's human rights record.

Promoted
Listen to the latest songs, only on JioSaavn.com
There was a consensus to resolve the fishing issue between the two nations, he said.

During the meeting, Mr Peiris also gave a "big presentation" to Ms Swaraj about various measures taken by his government in the field of reconciliation and accountability process to protect human rights of various sections of the society, including Tamils.