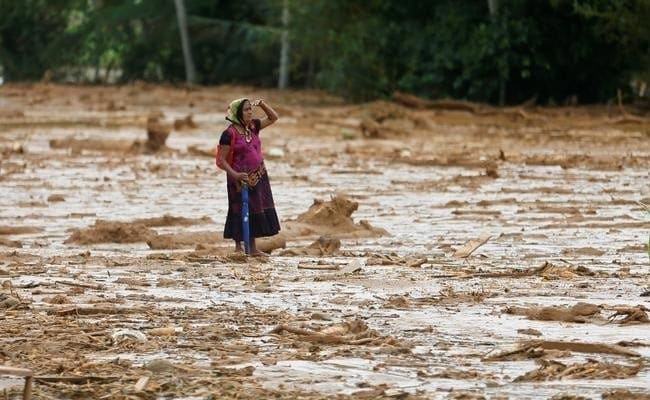 The Disaster Management Centre in Sri Lanka said the death toll in the landslide has reached to 92 while 109 people are still missing. (Reuters Photo)

COLOMBO: Rescuers on Sunday pulled out 23 more bodies from the debris of disastrous landslides in Sri Lanka, taking the toll to 92 while over 100 people remained missing in floods triggered by rains even as relief aid poured in from across the world, including India, for lakhs displaced.

The rains, the heaviest in the country in over a quarter century, have pounded Sri Lanka since last weekend, triggering huge landslides that have buried some victims in up to 50 feet of mud.

Sri Lankan army and other rescuers pulled out 15 more bodies in the last 24 hours in the worst-hit district of Kegalle, about 100 kilometres from in Colombo.

<div id='ndtvrelcontent'></The Disaster Management Centre said the death toll in the landslide has reached to 92 while 109 people are still missing.

Around 3,40,000 people have been displaced across the country in the floods and landslides, said Pradeep Kodippili, spokesman of the Disaster Management Centre.

The death toll is likely to go up as rescue teams reach some of the worst-hit areas, authorities said.

The national Disaster Management Centre (DMC) said that 21 of Sri Lanka's 25 districts have been badly affected due to the floods and landslide.

The military said the search for the missing persons is on in Aranayake where over 40 bodies have been pulled out from the debris.

"The sun was out this morning, yet the search operations were not easy," Major General Sudantha Ranasinghe said.

Meanwhile, floodwaters were receding in the capital Colombo and in the Western province's Kelaniya and Kaduwela areas.

Sri Lankan authorities are now bracing to meet the mounting challenge of preventing outbreak of diseases as floodwaters are being contaminated with garbage and raw sewage.

"There is a real danger of diarrhoea and skin diseases spreading among the flood victims," Colombo Municipal Council medical chief Ruwan Wijayamuni said.

International aid poured in Sri Lanka, bringing help to lakhs of people driven from their homes by heavy rains and deadly landslides.

Various nations, including India, Pakistan, China, Australia and Japan are bringing in aid supplies such as blankets, water-purification tablets and drinking water.

The UN has pledged to support the Sri Lankan government in its efforts to respond to the needs on the ground.