More rains are expected in the next two days as the depression in the east central Bay of Bengal intensified into a cyclonic storm 'MORA'. 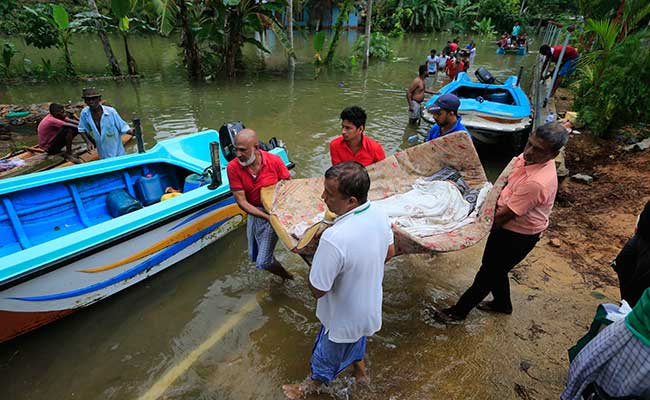 Authorities said cleaning up operations in Ratnapura and Kalutara could take weeks.

Colombo: Rescuers in Sri Lanka today pulled out more bodies buried in the mudslides triggered by the country's worst torrential rains in 14 years, taking the number of deaths to 164. The Disaster Management Centre (DMC) said 104 people are still missing while 88 remain in hospital.

The incessant rains experienced since Thursday night have driven nearly half a million people out of their inundated homes in the southern and western regions.

Police said a Sri Lankan Airforce helicopter (SLAF) MI-17 carrying relief aid for flood victims crashed in the southern Galle district, the worst hit of the 14 districts by flash floods and earth slips in the ongoing monsoonal rains, while carrying out relief operations in the flood-stricken areas.

There were no casualties and Sri Lankan President Maithripala Sirisena telephoned the Squadron Leader Bhanuka Delgoda, the pilot of the MI-17 to congratulate him for his bravery.

The pilot lost control of the helicopter due to bad weather and crashed into woods, police said.

On Saturday, a Lanka Air Force airman, YMS Yaparatne, 37, died while carrying out relief operations in the Galle district as he fell off from the helicopter.

More rains are expected in the next two days as the depression in the east central Bay of Bengal intensified into a cyclonic storm 'MORA' and is now moving away from the island, it said.

Flood waters were receding in the worst affected districts of Ratnapura and Kalutara but the authorities said cleaning up operations could take weeks.

Some 412 houses were fully damaged with over 4,200 houses suffering partial damage. Some 471,000 people remain displaced while over 75,000 people are currently being housed in over 330 temporary relief accommodation.

China is to donate relief items worth of $2.2 million.

The relief goods, to be dispatched to Colombo by a chartered flight soon, include tents, blankets, sheets, rain boots and life jackets.

The second Indian relief ship, INS Shardul arrived at Colombo Port yesterday. It has nearly 200 personnel on board, including specialised rescue, diving and medical teams, as well as a large amount of relief material and Gemini inflatable boats.

The first ship, INS Kirch reached Colombo on May 27.

The 40 tonnes of relief materials on board INS Shardul included rice, flour, pulses, sugar, bedsheets, blankets, rain coats, milk, biscuits, etc. The rescue, diving and medical teams on board will work in coordination with the Sri Lankan Navy and other authorities, and are now being deployed in the worst affected areas, particularly Ratnapura and Horana.

Chinese President Xi Jinping and Premier Li Keqiang sent condolence messages to President Sirisena and Prime Minister Ranil Wickremesinghe respectively on the loss of the lives and property in floods and landslides caused by heavy rain.

The flooding is the worst since May 2003 when 250 people were killed and 10,000 homes destroyed after a similarly powerful Southwest monsoon, officials had said. Sri Lanka, which has been heavily deforested for cash crops, often witnesses landslides during the monsoon season.
Comments
Sri Lanka FloodsSri Lanka RainsSri Lanka Disaster Management CentreSri Lanka cycloneMoraCylcone Mora