SpaceX has landed so many rockets that it can be easy to forget just how difficult - and majestic - the feat actually is. 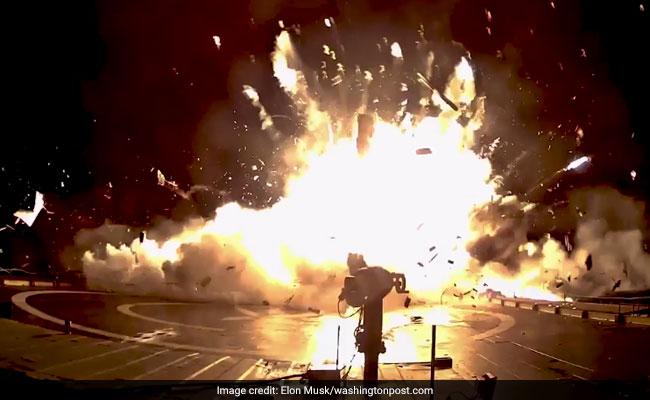 Elon Musk presented a blooper reel of the company's many failed attempts, a two-minute video

SpaceX founder Elon Musk once said that he would measure the success of his company's efforts to land and reuse rocket boosters when it became so routine that it was no longer newsworthy.

Now, since December 2015, the company has landed a total of 16 rockets, on either a landing platform at sea or its helicopter-like landing pad at Cape Canaveral Air Force Station in Florida, turning what was once a jaw-dropping and unprecedented bit of aerial artistry into a somewhat ho-hum, to-be-expected exercise. SpaceX has landed so many rockets that it can be easy to forget just how difficult - and majestic - the feat actually is.

Perhaps that's why Musk on Thursday morning presented a blooper reel of the company's many failed attempts, a two-minute video, set to a John Philip Sousa march, of explosion after fiery explosion. There are rockets crashing into a landing platform at sea and into the ocean itself, and one test vehicle that went awry and exploded in midair. Each one is a reminder of how difficult, and revolutionary, the achievement actually is.

Since its founding in 2002, SpaceX's goal has been to significantly lower the cost of space travel, making destinations such as Mars achievable.

One of the best ways to do that, the company figured, was to stop throwing away the first stages of its rockets. Traditionally, rockets' first stages would boost its payload to orbit, then separate and fall back toward Earth, disappearing into the ocean, never to be used again.

To Musk, that never made sense - like throwing away an airplane after each flight, as he has said. First stages, or boosters, are the most expensive part of the rocket. It's where the majority of the engines are found - in the case of SpaceX's Falcon 9 rocket, there are nine engines in that first stage.

Pulling off the landing, however, is not easy. The booster could be traveling nearly 4,000 mph before its engines shut off. Then, if landing on land, it would flip around then light its engines again, to perform a "boost-back burn" sending the rocket back to Cape Canaveral, guided by GPS. As the rocket entered the atmosphere, the engines would light again, for a "reentry burn," before lighting one more time as the rocket would touch down softly.

By landing the first stage, and using it over again, SpaceX figures to lower the cost of spaceflight. But as SpaceX's video shows, it was a difficult and painful path. Each failure, though, resulted in new data for the company's engineers to study, making tweaks to the rocket's software and the complex algorithms used to safely land the booster.

Promoted
Listen to the latest songs, only on JioSaavn.com
The fact that the company can now release the video - revealing several clips of new footage - shows just how far the company has come.