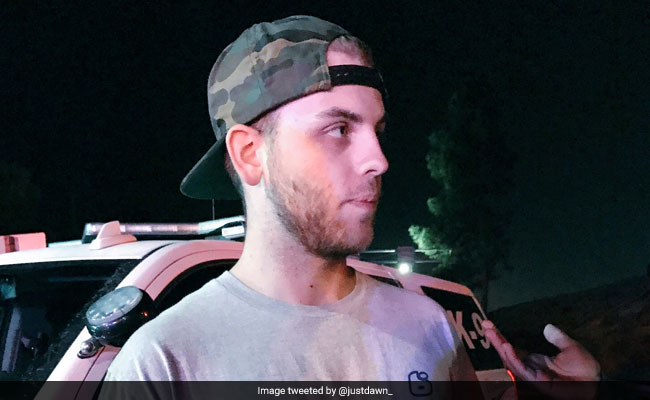 Matt Wennerstrom said he is a regular at the Borderline Bar & Grill and customers are like his "family."

In the aftermath of the shooting at a country music bar in Thousand Oaks, California, in which 12 people were killed, survivors are starting to tell their stories of how they escaped through a window with the help of a fast-acting bar patron.

Customer Matt Wennerstrom, 20, told several news outlets that once he saw the shooter open fire, he quickly ushered people behind a pool table.

"There was a bunch of us that were just looking for cover, and we were standing right next to a pool table," Wennerstrom told ABC News. "And so we got everyone behind the pool table and down, and then there was probably six or seven of us dog-piling over the girls that were beneath us."

When the shooter reloaded his gun, Wennerstrom said he knew he had a moment to act. He saw someone grab a bar stool and throw it through a window, and he did the same thing, shattering the glass.

"Bar stools go through windows," he told ABC. "It works."

Then, he said, he and others pushed down the broken glass and helped about 30 or 35 people out.

"We just stood there basically forcing as many people out as fast as we could until we cleared everyone out and then we jumped out ourselves," he told the news station. "Then it was just trying to collect everyone and push them down and out of sight and as far away as possible."

Wennerstrom told CBS News he is a weekly regular at the Borderline Bar & Grill, and the other customers are like "family."

"We've known a lot of these people for upwards of 10, 15 years, we grew up with them," he said. "It's not just something where you get out of there and fend for yourself. It's 'what can I do to protect as many of my friends as possible.' "

Social media lit up with people thanking him and calling him a hero. One Twitter user wrote: "We need more Matt Wennerstroms in the world."

This young man is a hero. He helped break windows & helped people escape #Borderline
I don't have his name but we need more good guys like him.
Thousand Oaks
Ventura pic.twitter.com/8Vxxce5Bgu

Another wrote, "Perfect example of 'Look for the helpers.' Matt Wennerstrom's ability to stay calm during such a horrific event is something to be admired. His demeanor after the fact is nothing but admirable strength. Kudos to him."

Perfect example of “Look for the helpers.” Matt Wennerstrom's ability to stay calm during such a horrific event is something to be admired. His demeanor after the fact is nothing but admirable strength. Kudos to him. #CaliforniaBarShooting#massshootinghttps://t.co/2mbAOP0iU9

And some argued his name should be spoken rather than the shooter's name.

Hey @Twitter,
I don't want to see the scumbag shooter's name in my trend list.
I don't want to hear that he was sad/angry/unloved etc.
I only want to see Ron Helus' name, & the names of the innocent victims who died today. Bless their families and friends. RIP #Californiashooting