A deputy sheriff, Ron Helus, was among those killed. 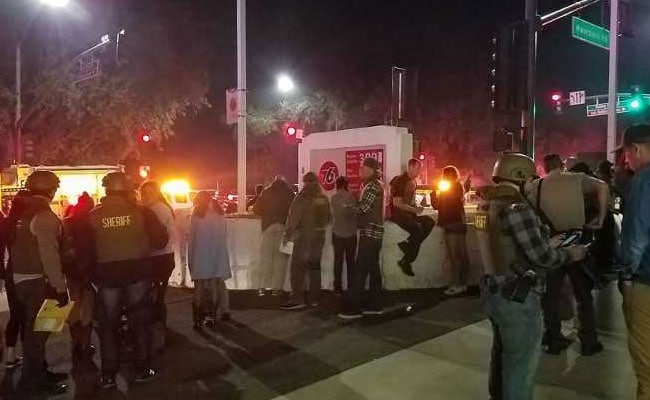 Authorities in Thousand Oaks, California, northwest of Los Angeles, reported 13 fatalities at a bar and dance hall late Wednesday after multiple shots were fired by a man inside. A deputy sheriff, Ron Helus, was among those killed.

"There are multiple fatalities," Ventura County Sheriff's Sgt. Eric Buschow told reporters on the scene. He did not provide a specific number.

Buschow said he believed the suspect was dead inside the Borderline Bar and Grill. He had not been identified. "We have no idea if there's a terrorism link or not," said an official at an early morning briefing.

A spokesman for the sheriff's department, Capt. Garo Kuredjian, gave a preliminary estimate of more than 11 people shot, including a deputy, and said he would "guess, if anything, that number would go up."

The reports of a shooter came in about 11:20 p.m. Pacific time Thursday. "This is still an active scene," Kuredjian said at about 12:50 a.m. Special weapons and tactics teams arrived on the scene a short time later, along with the FBI. Video from the scene showed bar-goers rushing injured people to medical response vehicles.

By early Thursday morning, the building had been cleared, Kuredjian said, adding, "We're confident there is no outstanding shooter."

A man and his stepfather interviewed by ABC7 Eyewitness News said they heard about 12 shots before they were able to exit through the front door of the nightclub.

"He fired the first shot," the stepfather said. "And I knew it was real. My son thought it was a joke, so I pulled him down and got some cover. I looked up, and he was moving to the right. He shot the front doorman, who was just a young man. Then he shot the cashier, just a young girl."

"It was sheer panic," said Teylor Whittler, 19, who was inside the venue at the time. "Everyone ran and dropped as fast as they could."

She said she ran to the back door, where people crowded as the gunfire briefly quieted. "And then all, of a sudden, a couple of guys started running to the back door and said, 'Get up he's coming.'"

Borderline describes itself as the county's largest country dance hall and live music venue. With a dance floor covering about 2,500 square feet, it is open until 2 a.m. five days a week.

Wednesday was "College Country Night" at the bar. Authorities said more than 100 had been inside at the time of the shooting.

Rochelle Hammons, 24, told The Post that she heard four shots before she was able to flee.

From inside her car, she saw the first police officer arrive, she said. She rolled down her window and told him there was an active shooter inside.

"You gotta hurry, you gotta get in there," she urged him.

The shooting unfolded just over a year after 58 people were killed at a country music festival in Las Vegas when Stephen Paddock, 64, opened fire from the 32nd floor of the Mandalay Bay Resort and Casino.