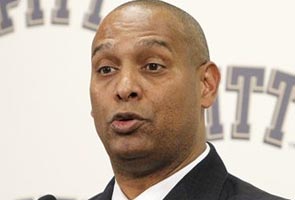 South Bend: New Pittsburgh coach Mike Haywood was jailed on Friday on a domestic violence charge after an incident at his South Bend home.

Assistant St. Joseph County Police Chief Bill Redman said Haywood was arrested about 3 pm on Friday after a custody issue developed with a woman with whom Haywood has a child.

The unidentified woman told police that Haywood grabbed her by the arm and neck and pushed her as she tried to leave.

Redman said the woman had marks on her neck, arms and back.

"The University of Pittsburgh is aware of an alleged incident involving head football coach Michael Haywood today in South Bend, Indiana," the school said in an e-mailed statement.

"The University expects the highest standards of conduct from its employees, including its coaches, and any breach of those standards is a very serious matter. The University will decline further comment until more complete information is available."

Haywood will be held without bond in the St. Joseph County jail until he goes before a judge. Redman said that might occur over the weekend, but no later than Monday.

Pittsburgh hired Haywood on Dec 16 to replace Dave Wannstedt, who resigned under pressure. Haywood led Miami (Ohio) to a 9-4 record this season and the Mid-American Conference championship.