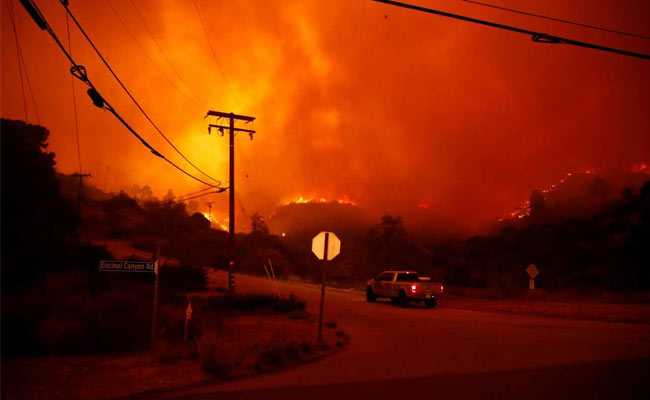 The wildfires in California have proved to be unstoppable, operating at flash-flood velocity. (Reuters)

A growing trio of wildfires incinerated large swaths of Northern and Southern California over the past three days, killing 11 people, displacing hundreds of thousands and turning a retirement community called Paradise into acres of ash and charred foundations. The massive Camp Fire north of Sacramento had destroyed some 6,700 structures, becoming the most destructive inferno in a state with a long and calamitous history of fires.

Since Thursday, more than 200,000 Californians have been displaced - greater than the population of the city of Orlando, Florida. In addition to the dead, dozens have been reported missing. Authorities warned that the property losses would also be staggering. A pair of fires near Los Angeles threatened Malibu mansions and destroyed Paramount Ranch, the filming location of the HBO series Westworld.

Before officials announced the latest grim statistics and rising death toll on Saturday, President Donald Trump fanned an ongoing dispute with California leaders, blaming mismanagement of state resources for the destruction and death.

"There is no reason for these massive, deadly and costly forest fires in California except that forest management is so poor," Trump tweeted Saturday morning. "Billions of dollars are given each year, with so many lives lost, all because of gross mismanagement of the forests. Remedy now, or no more Fed payments!"

California officials have countered Trump's claims in the past, saying that ever-intense fires are the result of global warming, which dries up vegetation and turns fire-prone areas of the state into a tinderbox.

Saturday morning was the first time Trump has spoken publicly about the California blazes.

Named after nearby Camp Creek, the blaze is not yet done. It had burned at least 90,000 acres, more than 140 square miles, and was only 20 percent contained by Saturday, causing officials to declare a state of emergency for a fire likely to worsen over the weekend.

Officials warned that "red flag" conditions would persist on and off through Monday, hot, dry and windy weather that makes the land ripe for a fire's spread.

Butte County Sheriff Kory Honea told reporters at a news conference Friday evening that officials had found nine people who had been killed by the fire: Four were found dead in their cars in Paradise, down from the five officials had spoken about earlier; three outside of houses; and two others, one inside a home, and another near a car.

The fire had injured an undisclosed number of residents as well as three firefighters. And Honea's deputies were still looking into some 35 reports of missing people.

"This event was the worst-case scenario," Honea said. "It's the event that we have feared for a long time."

Trump has loudly and consistently blamed intensifying wildfires on poor resource management by California officials. In August, with fires growing to historic sizes in California, Trump tweeted that the state is "foolishly" diverting "vast amounts of water from the North," blaming bad environmental laws for the summer's deadly fires.

Twice in October, Trump made similar threats because of what he alleged was poor forest management policy, The Washington Post's Aaron Blake wrote.

Universally, California officials' response has been that the real culprit behind intensifying wildfires is climate change.

As The Washington Post's Angela Fritz wrote in July, a hotter-than average summer and dry winter have "led to tinder-dry vegetation," in areas scorched by the Carr fire during Redding, California's hottest July on record. "The energy release component, or how much fuel is available for the fire, is at the highest it has been around Redding since at least 1979," Fritz wrote.

In Southern California's Ventura County, still reeling from a mass shooting that left 12 people dead, more wildfires had broken out, forcing 100,000 people in Thousand Oaks, Malibu and other areas to flee their homes. The Woolsey Fire had burned some 35,000 acres, officials said, while the nearby Hill Fire had burned through 6,000.

On Saturday, Los Angeles County Sheriff's Chief John Benedict told The Associated Press that two people have been found dead in the fire zone of a Southern California blaze.

The deaths are the first from the pair of wildfires burning to the north and west of downtown Los Angeles.

But of all the areas struck by fires in the state so far, Paradise had fared the worst. Its main commercial street transformed into a smoking runway of destruction. Officials said that 6,453 homes and 260 businesses had been destroyed, making the fire the most destructive in California's history. The previous record holder, the Tubbs Fire in the state's wine country, was just one year ago.

Marc Kessler, 55, a science teacher at a public middle school in Paradise, said the sky turned black soon after he arrived at work.

"It was raining black pieces of soot, coming down like a black snowstorm and starting fires everywhere," he said in an interview. "Within minutes, the town was engulfed."

Teachers were told by emergency workers to forgo seat-belt laws as they piled 200 or so students into their personal vehicles. Bus drivers drove through flames to help out, he said. One of his students pointed out what they thought was the moon in the darkened sky.

"I said, 'That's not the moon. That's the sun,' " he recalled, his voice cracking. "There were times when you couldn't see though the smoke."

The mayor of Paradise, Jody Jones, said most of the buildings in her town of 26,000 had been destroyed.

"There are very few homes still standing and we've been in multiple different neighborhoods this afternoon," Jones told CNN. "There's really not much left."

Paradise resident Brynn Chatfield posted a terrifying video as she and her family escaped the fire, flames a few feet from their vehicle and embers shooting across their path.

The video concluded as the vehicle emerged from the flames into a normal day. Chatfield later posted the video, which has since been seen nearly 2 million times.

"My hometown of Paradise is on fire," she wrote. "My family is evacuated and safe. Not all my friends are safe."

On Saturday, as some evacuation orders were lifted, people began returning to their neighborhoods to see what was left.

Jeff McClenahan, 53, a college professor, returned Saturday to his home in Malibou Lake and found it destroyed, burned to the foundation Friday by the Woolsey Fire, which had jumped Highway 101.

He stared, disbelieving, then dropped to his knees, sobbing.

"On the one hand, it's just crap," he said. "It's stuff. But it's a lot of history. Everything, our whole lives were in here."

(Except for the headline, this story has not been edited by NDTV staff and is published from a syndicated feed.)
Comments
californiawildfireUS wildfire