The co-pilot of a Chinese Sichuan Airlines flight was also almost sucked out of his plane after a part of the cockpit windshield broke. 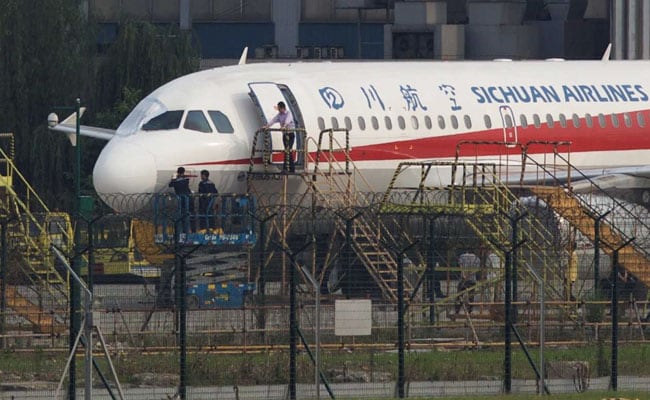 Getting sucked halfway out of a plane window is the stuff of movies and nightmares and it happens extremely rarely.

After taking off at the Chinese municipality of Chongqing, passengers and crew sensed that something was wrong about half an hour into their flight to the Tibetan capital of Lhasa.

"We experienced a few seconds of free fall before it stabilized again," one passenger told Chinese media.

But that wasn't just turbulence. At the front of the plane, the pilot was fighting for the life of his colleague - who at that point had been almost entirely sucked out of the plane and was only being held back by his seat belt.

"Suddenly, the windshield just cracked and made a loud bang. The next thing I know, my co-pilot had been sucked halfway out of the window," said pilot Liu Chuanjian, speaking to Chinese media.

Liu managed to pull his co-pilot back into the cockpit, according to his own account. The co-pilot only suffered non-life-threatening injuries in the drama that unfolded at an altitude of 32,000 feet.

The pilot then managed to land the Airbus A319 in the city of Chengdu in a turbulent descent that injured another crew member.

"Everything in the cockpit was floating in the air. Most of the equipment malfunctioned . . . and I couldn't hear the radio. The plane was shaking so hard I could not read the gauges," he was quoted as saying by Chinese media.

French Airbus representatives later said they would send teams to China to investigate what triggered the 7-year-old plane's malfunctioning. Airbus A319s can carry up to 160 passengers and are widely used around the world by European and U.S. airlines.

While Sichuan Airlines mostly operates in Asia, it also offers flights to international destinations in Australia, New Zealand, Europe and North America. According to its website, it operates on routes to Los Angeles and Vancouver, among other destinations.

The last known emergency of that kind occurred almost three decades ago, in 1990, when a British Airways pilot survived a similar incident at an altitude of 23,000 feet. While lightning strikes or objects in the flight path can sometimes crack windshields, incidents like Monday's are extremely rare - but when they do happen, they almost always end with passengers, crew members or pilots being sucked out of the planes completely or partially, according to my colleagues Lori Aratani and Faiz Siddiqui:

"It's all about air pressure, which varies depending on location. At sea level, atmospheric pressure is about 14.7 psi (pounds per square inch), Thomas Anthony, director of the University of Southern California's aviation security program, told the Verge. But at an airplane's cruising altitude, about 33,000 feet, it drops to about 4 psi. That is why the higher you go, the more difficult it is to breathe. The air gets thinner. It's the reason climbers on Mount Everest must carry oxygen with them.

"Aircraft cabins are pressurized to keep passengers comfortable and alive at high altitudes, said Jim Gregory, a professor of aeronautical engineering and director of the Aerospace Research Center at Ohio State University.

"'When the window ruptures, you have those two pressure levels trying to equalize,' said Ladd Sanger, an aviation attorney and licensed airplane and helicopter pilot. 'The pressure inside the airplane is escaping out that hole to attempt to equalize, which is why it's creating that suction and pulling from inside the aircraft.'"

"Those conditions explain how a passenger could be partially pulled into a small airplane window. And the difficulty of pulling them back in."

Monday's incident didn't result in the worst-case scenario, but it may still shake some passengers' confidence in an industry that has statistically speaking never been safer.

"I don't dare to take an airplane anymore," one passenger told Chinese media.

(This story has not been edited by NDTV staff and is auto-generated from a syndicated feed.)
Comments
Sichuan Airlinescockpit windshield