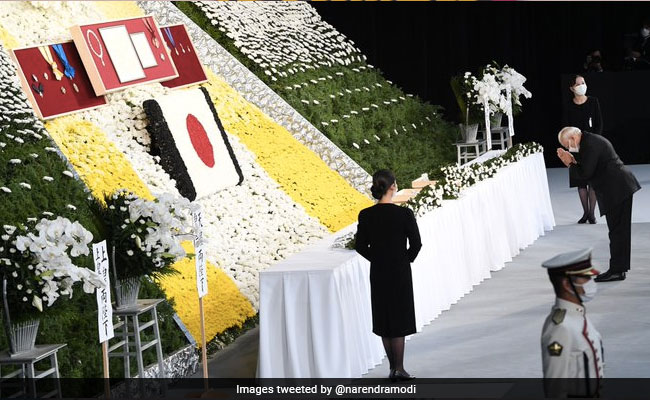 Shinzo Abe "was a great leader, a phenomenal individual and someone who believed in India-Japan friendship", Prime Minister Narendra Modi recalled today as he offered tribute to the former Japanese premier at his state funeral in Tokyo. Representatives from over 100 countries, including more than 20 heads of state and governments, attended Mr Abe's funeral.

PM Modi, who arrived in Tokyo early in the morning, joined several global leaders to pay floral tribute to Mr Abe who reshaped Japan's foreign policy, including setting out a bold vision for a quantum leap in ties with India.

"When I was in Tokyo earlier this year, little did I imagine I would be back for the solemn programme of former PM Abe's state funeral. He was a great leader, a phenomenal individual and someone who believed in India-Japan friendship. He shall live on in the hearts of millions!," PM Modi tweeted, sharing a photograph of him paying tribute to Mr Abe.

Earlier, the Ministry of External Affairs tweeted that the prime minister paid his respects to former Japanese premier Shinzo Abe during the State Funeral at Nippon Budokan in Tokyo.

"A tribute to a great visionary and to his immense contribution in the elevation of the India-Japan partnership," it said.

At a park near the funeral venue, large numbers of people gathered to lay flowers at a set of stands from early in the morning, it said.

Shinzo Abe, 67, was shot dead while making a campaign speech on July 8 in the southern Japanese city of Nara.