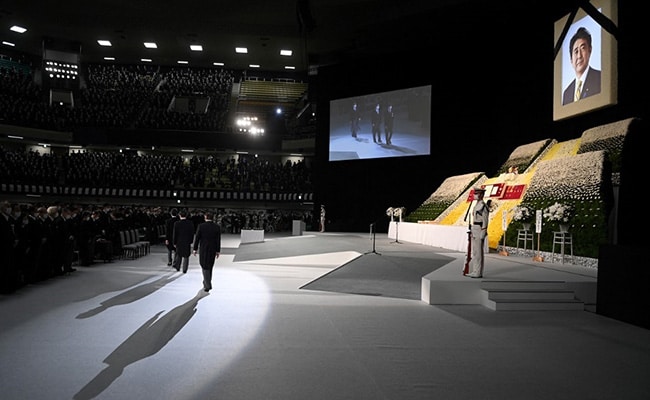 India had announced a one-day national mourning on July 9 as a mark of respect for Mr Abe.

The ceremony has seen public opposition over the huge costs incurred, and also because state funerals are reserved for the Imperial family. This is only the second time a politician is getting a state funeral, the last one was decades ago. Around 60 percent of Japanese are against the event, recent polls showed.

Dressed in a black kimono, Akie carried the ashes in a box covered with a decorative fabric into the Budokan venue as a 19-gun salute sounded in honour of the ex-premier.

The former Prime Minister reshaped Japan's foreign policy, including setting out a bold vision for a quantum leap in ties with India. 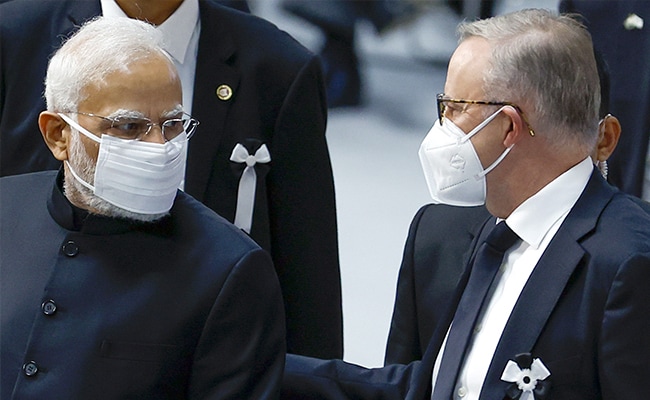 PM Modi had on Tuesday met his Japanese counterpart Fumio Kishida and underlined the late Japanese leader's contributions in strengthening the bilateral partnership as well as his vision of a free, open and inclusive Indo-Pacific region.

Abe was Japan's longest-serving prime minister and one of the country's most recognisable political figures, known for cultivating international alliances and his "Abenomics" economic strategy.

"I am travelling to Tokyo tonight to participate in the State Funeral of former PM Shinzo Abe, a dear friend and a great champion of India-Japan friendship," PM Modi had tweeted.

"I will be conveying heartfelt condolences to Prime Minister Kishida and Mrs. Abe on behalf of all Indians. We will continue working to further strengthen India-Japan relations as envisioned by Abe San. @kishida230," he had said.

Mr Abe, 67, was shot dead while making a campaign speech three months back in the southern Japanese city of Nara. His accused killer targeted the former leader believing he had ties to the Unification Church, which the attacker resented over massive donations his mother had made to the sect.

India had announced a one-day national mourning on July 9 as a mark of respect for Mr Abe.