The story Dixon-Cole spun afterward was alarming: She claimed the trooper repeatedly told her he'd let her go in exchange for sexual favors. 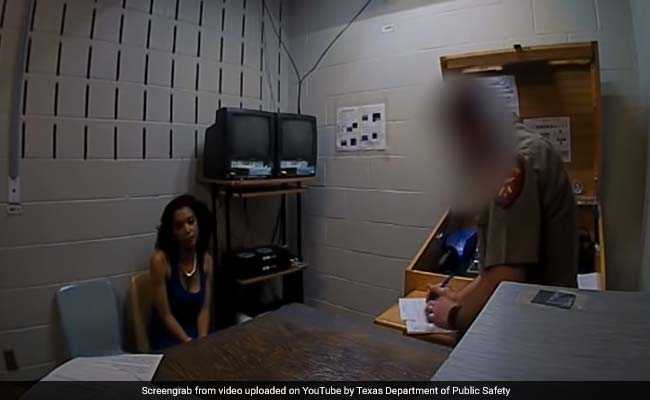 Sherita Dixon-Cole, a 37-year-old woman from northeast Texas, was pulled over early Sunday by a Department of Public Safety officer who suspected her of driving while intoxicated.

Her story was widely shared on social media, aided by social activist and blogger Shaun King, who recently brought attention to the New York lawyer who made xenophobic comments about Spanish-speaking employees at a New York deli. King wrote in a blog post: "This system was not designed to protect us - it was designed to punish us - and for it to do anything other than that - we must force it work on our behalf."

But on Tuesday, the Texas Department of Safety released nearly two hours of body camera footage that starkly conflicts with Dixon-Cole's claims. While parts of the video are blurred or inaudible to conceal the Dixon-Cole's personal information, it shows her being pulled over and asked to take a sobriety test. She's then handcuffed and transported to the Ellis County jail, where she's charged with a DWI. She was released Sunday night after posting bond.

Lee Merritt, Dixon-Cole's Dallas-based attorney, apologized for her claims in a statement Wednesday, saying the footage conflicted with what was reported to him.

"It is deeply troubling when innocent parties are falsely accused and I am truly sorry for any trouble these claims may have caused Officer Hubbard and his family," he wrote. "I take full responsibility for amplifying these claims to the point of national concern."

He wrote that his office receives hundreds of abuse complaints from across the country and is obligated to filter them before broadcasting them. His swiftness in publicizing Dixon-Cole's claims, Merritt wrote, was a means of getting to the truth quickly and accurately.

Merritt thanked those who voiced their demands for justice in the wake of the falsified incident.

"However," he wrote, "In this matter it seems your righteous vigilance was abused."

King, who has worked with a number of anti-police brutality and misconduct causes including Black Lives Matter and is now a columnist for national security news site The Intercept, appears to have deleted his tweet sharing Dixon-Cole's allegations. On Wednesday, he tweeted that the body camera footage "does not appear to show any verbal threats, sexual assault, or police brutality." He also amended his blog post to acknowledge the body camera footage.

Still, the incident exemplified the power of King's position, and the widespread attention to the case could likely be traced back to his sway on Twitter. During the Charlottesville, Virginia, protests in August - when six white supremacists kicked a 20-year-old African-American and pummeled him with what appeared to be wooden sticks and a large board - King took it upon himself to try and identify the assailants so that they could be arrested.

He was credited with identifying at least two of the attackers, The Post's Ian Shapira reported.

On Wednesday afternoon, King published an article on Medium in part titled "When the 'victim' you fought for turns out to be the victimizer," which addressed Dixon-Cole's allegations. He wrote that Dixon-Cole stood by her claims and said the body camera footage must have been edited.

"This is not unthinkable," he wrote. "I have seen it happen before, but it absolutely does not appear to happen here. Outside of personal information being blurred out, the video appears to be in its original form."

He went on to write that in the United States, tens of thousands of people are assaulted, abused, falsely arrested and threatened by police. But, he wrote, Dixon-Cole is not one of those victims:

The Texas DPS said in a statement that it was authorized by the Ellis County District Attorney's Office to release the body camera footage after "spurious and false accusations" were brought against the trooper.

"The video shows absolutely no evidence to support the egregious and unsubstantiated accusations against the Trooper during the DWI arrest of the suspect," officials said. "The Department is appalled that anyone would make such a despicable, slanderous and false accusation against a peace officer who willingly risks his life every day to protect and serve the public."

Promoted
Listen to the latest songs, only on JioSaavn.com
It is not clear whether Dixon-Cole will face criminal charges for her accusations. Ellis County District Attorney Patrick Wilson told the Dallas Morning News Wednesday that his office was still investigating "what was said and who it was said to."

(This story has not been edited by NDTV staff and is auto-generated from a syndicated feed.)
Comments
TexasTexas Department of Public Safety