City officials said it was too soon to tell whether the car crash was intentional, but the driver of one of the vehicles was taken into custody. 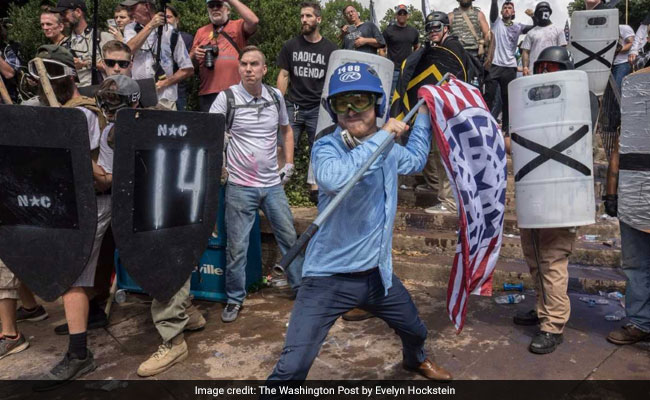 Governor Terry McAuliffe declared a state of emergency shortly before 11 am.

CHARLOTTESVILLE, Virginia: Chaos and violence turned to tragedy Saturday as hundreds of white nationalists, neo-Nazis and Ku Klux Klan members - planning to stage what they described as their largest rally in decades to "take America back" - clashed with counterprotesters in the streets and a car plowed into crowds, leaving one person dead and 19 others injured.

Hours later, two state police officers died when their helicopter crashed at the outskirts of town. Officials identified them as Berke M.M. Bates of Quinton, Virginia, who was the pilot, and H. Jay Cullen of Midlothian, Va., who was a passenger. State police said their Bell 407 helicopter was assisting with the unrest in Charlottesville. Bates died one day before his 41st birthday; Cullen was 48.

Gov. Terry McAuliffe (D), who had declared a state of emergency in the morning, said at an evening news conference that he had a message for "all the white supremacists and the Nazis who came into Charlottesville today: Go home. You are not wanted in this great commonwealth." 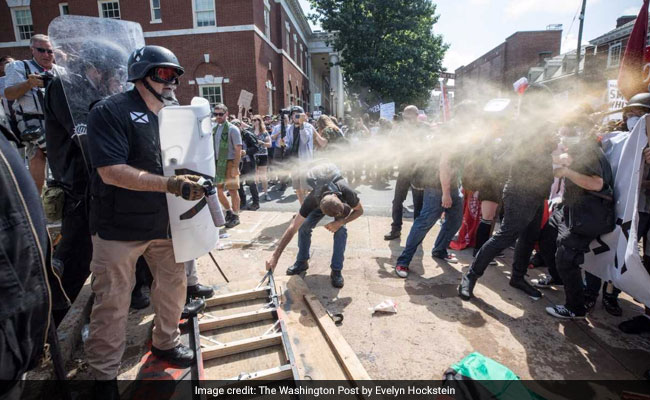 Maurice Jones, Charlottesville's African-American city manager, looked stricken as he spoke. "Hate came to our town today in a way that we had feared but we had never really let ourselves imagine would," he said.

In an emergency meeting Saturday evening, the Charlottesville City Council voted unanimously to give police the power to enact a curfew or otherwise restrict assembly as necessary to protect public safety.

Video recorded at the scene of the car crash shows a 2010 gray Dodge Challenger accelerating into crowds on a pedestrian mall, sending bodies flying - and then reversing at high speed, hitting yet more people. Witnesses said the street was filled with people opposed to the white nationalists who had come to town bearing Confederate flags and anti- Semitic epithets.

A 32-year-old woman was killed, according to police, who said they were investigating the crash as a criminal homicide. The driver of the Challenger was taken into custody and charges were pending, said Al Thomas, the Charlottesville police chief.
The car is registered to 20-year-old James Alex Fields of Ohio, according to vehicle registration records reviewed by The Washington Post. Albemarle-Charlottesville Regional Jail Superintendent Martin Kumer told The Post that a man with the same name and age was booked Saturday on suspicion of second-degree murder, malicious wounding, failure to stop for an accident involving a death, and hit-and-run. Kumer said Fields is being held without bail and is scheduled to be arraigned Monday in Charlottesville General District Court.
Records show Fields last lived in Maumee, Ohio, about 15 miles southwest of Toledo.

Angela Taylor, a spokeswoman for the University of Virginia Medical Center, said 19 others were brought to the hospital in the early afternoon after the car barreled through the pedestrian mall. Five were in critical condition as of Saturday evening. Another 14 people were hurt in street brawls, city officials said.

Earlier, police evacuated a downtown park as rallygoers and counterprotesters traded blows and hurled bottles and chemical irritants at one another, putting an end to the noon rally before it officially began.

Despite the decision to quash the rally, clashes continued on side streets and throughout downtown, including the pedestrian mall at Water and Fourth streets where the Challenger slammed into counterprotesters and two other cars in the early afternoon, sending bystanders running and screaming.
"I am heartbroken that a life has been lost here," Charlottesville Mayor Michael Signer (D) said in a tweet. "I urge all people of good will - go home."
Elected leaders in Virginia and elsewhere urged peace, blasting the white supremacist views on display in Charlottesville as ugly. U.S. House Speaker Paul Ryan, R-Wis., called the display "repugnant."

But President Trump, known for his rapid-fire tweets, remained silent throughout the morning. It was after 1 p.m. when he weighed in, writing on Twitter: "We ALL must be united & condemn all that hate stands for. There is no place for this kind of violence in America. Lets come together as one!"

In brief remarks at a late- afternoon news conference in New Jersey to discuss veterans' health care, Trump said he was following the events in Charlottesville closely. "The hate and the division must stop and must stop right now," Trump said, without specifically mentioning white nationalists or their views. "We condemn in the strongest possible terms this egregious display of hatred, bigotry and violence on many sides. On many sides."

Former Ku Klux Klan leader David Duke, a Trump supporter who was in Charlottesville on Saturday, quickly replied. "I would recommend you take a good look in the mirror & remember it was White Americans who put you in the presidency, not radical leftists," he wrote.

Dozens of the white nationalists in Charlottesville were wearing red Make America Great Again hats. Asked by a reporter in New Jersey whether he wanted the support of white nationalists, Trump did not respond.

Even as crowds began to thin Saturday afternoon, the town remained unsettled and on edge. Onlookers were deeply shaken at the pedestrian mall, where ambulances had arrived to treat those injured by the car. 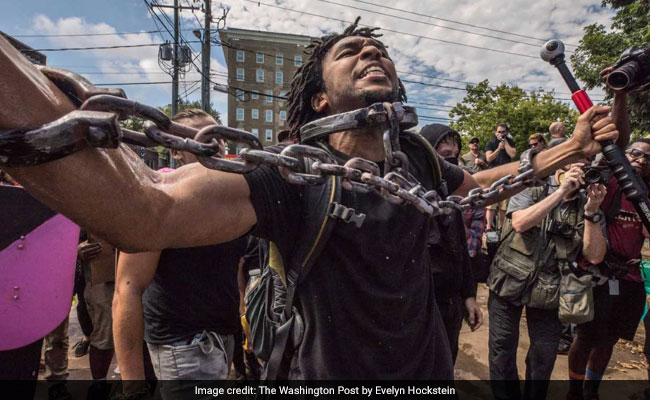 Chan Williams, 22, was among the counterprotesters at the pedestrian mall, chanting "Black Lives Matter" and "Whose streets? Our streets!" The marchers blocked traffic, but Williams said drivers weren't annoyed. Instead, she said, they waved or honked in support.

So when she heard a car engine rev up and saw the people in front of her dodging a moving car, she didn't know what to think.

"I saw the car hit bodies, legs in the air," she said. "You try to grab the people closest to you and take shelter."

Williams and friend George Halliday ducked into a shop with an open door and called their mothers immediately. An hour later, the two were still visibly upset.

Saturday's Unite the Right rally was meant to protest the planned removal of a statue of Confederate General Robert E. Lee. The city of Charlottesville voted to remove the statue earlier this year, but it remains in Emancipation Park, formerly known as Lee Park, pending a judge's ruling expected later this month.

They were met by counterprotesters at the base of a statue of Thomas Jefferson, who founded the university. One counterprotester apparently deployed a chemical spray, which sent about a dozen rallygoers seeking medical assistance.

On Saturday morning, people in combat gear - some wearing bicycle and motorcycle helmets and carrying clubs, sticks and makeshift shields - fought one another on downtown streets, with little apparent police interference. Both sides sprayed chemical irritants and hurled plastic bottles through the air.

A large contingent of Charlottesville police officers and Virginia State Police troopers in riot gear were stationed on side streets and at nearby barricades but did nothing to break up the melee until about 11:40 a.m. Using megaphones, police then declared an unlawful assembly and gave a five-minute warning to leave Emancipation Park.

Asked why police did not act sooner to intervene as violence unfolded, Toscano said he could not comment. "But they trained very hard for this, and it might have been that they were waiting for a more effective time to get people out" of Emancipation Park, he said.

By early afternoon, hundreds of rallygoers had made their way to a larger park two miles to the north. Duke, speaking to the crowd, said that European Americans are "being ethnically cleansed within our own nation" and called Saturday's events "the first step toward taking America back."

White nationalist leader Richard Spencer also addressed the group, urging people to disperse. But he promised they would return for a future demonstration, blaming Saturday's violence on counterprotesters.

In an interview, Spencer said he was "beyond outraged" the police had declared the planned rally an "unlawful assembly."

"I never before thought that I would have my country cracking down on me and on free speech," he said. "We were lawfully and peacefully assembled. We came in peace, and the state cracked down."

He said that counterprotesters attacked rallygoers but also acknowledged that "maybe someone threw a first punch on our side. Maybe that happened. I obviously didn't see everything."

By 11 a.m., several fully armed militias and hundreds of right-wing rallygoers had poured into the small downtown park that was to be the site of the rally.

Counterprotesters held "Black Lives Matter" signs and placards expressing support for equality and love as they faced rallygoers who waved Confederate flags and posters that said "the Goyim know," referring to non-Jewish people, and "the Jewish media is going down." 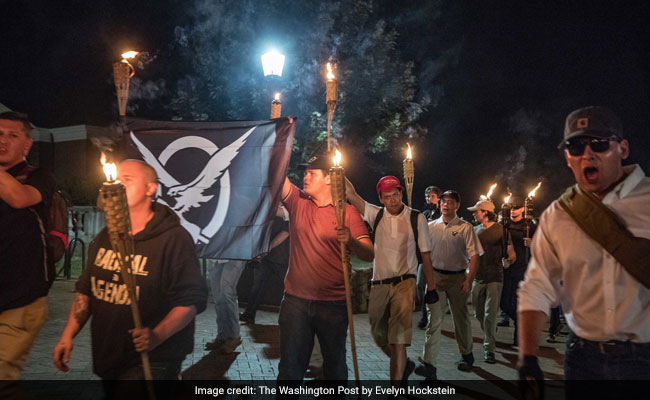 "No Trump! No KKK! No fascist USA!" the counterprotesters chanted.

Michael Von Kotch, a Pennsylvania resident who called himself a Nazi, said the rally made him "proud to be white."

He said that he's long held white supremacist views and that Trump's election has "emboldened" him and the members of his own Nazi group.

"We are assembled to defend our history, our heritage and to protect our race to the last man," Von Kotch said, wearing a protective helmet and sporting a wooden shield and a broken pool cue. "We came here to stand up for the white race."

Naundi Cook, 23, who is black, said that she came to Saturday's counterprotests to "support my people" but that she's never seen something like this before.

When violence broke out, she started shaking and got goose bumps.

"I've seen people walking around with tear gas all over their face, all over their clothes. People getting Maced, fighting," she said. "I didn't want to be next."

Cook said she couldn't sit back and watch white nationalists descend on her town. She has a 3-year-old daughter to stand up for, she said.

"Right now, I'm not sad," she said once the protests dispersed. "I'm a little more empowered. All these people and support, I feel like we're on top right now because of all the support that we have."

Saturday marked the second time in six weeks Charlottesville has faced a protest from white supremacist groups for its decision to remove the statue of Lee. On July 8, about three dozen members of a regional Ku Klux Klan group protested in the city.

Promoted
Listen to the latest songs, only on JioSaavn.com
City officials, concerned about crowds and safety issues, tried to move Saturday's rally to a larger park away from the city's downtown. But Jason Kessler, the rally's organizer, filed a successful lawsuit against the city that was supported by the Virginia ACLU, saying his First Amendment rights would be violated by moving the rally.