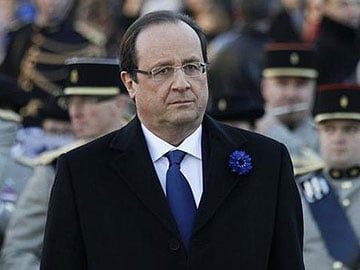 Paris: French police detained about 70 people at an Armistice Day memorial ceremony on Monday after protesters whom the government said were linked to the far right booed President Francois Hollande.

Newscasters said it was the first time a French head of state had been jeered on November 11, which commemorates the signing of the armistice in 1918 between World War One allies and Germany.

Scuffles erupted between police and the protesters as the Socialist president's motorcade drove up the tree-lined Champs- Elysees boulevard to the Tomb of the Unknown Soldier beneath the Arc de Triomphe in central Paris.

Some of the protesters shouted "Hollande, step down" and "Socialist Dictator!" Interior Minister Manuel Valls said they included members of far-right groups opposed to government policies such as same-sex marriages.

"Today on the Champs-Elysees, several dozen individuals linked to the far right ... did not want to respect this moment of contemplation and gathering," Valls told reporters, describing their actions as "unacceptable".

The 70 were arrested because the demonstration was not authorised, said a source at the presidential palace.

One protester told BFM-TV the boos and gibes were targeted purely at Hollande. "I find it absolutely shameful that we don't have the right to speak up without being arrested," said the woman. "Saying 'Hollande, step down' is not offensive."

"We have the impression that he's not listening so we have to protest," she said, without specifying why she wanted the president to resign.

Polls published on Monday by OpinionWay and Ipsos showed Hollande's popularity ratings, pummelled by an ailing economy, heavy taxes and other issues, at a mere 22 percent and 21 percent, respectively.

Those ratings fell below the 25 percent approval rating in a CSA survey published Friday, which had put his popularity at the lowest level of any president since the founding of France's Fifth Republic 55 years ago.

Promoted
Listen to the latest songs, only on JioSaavn.com
Protests have forced Hollande to give ground over planned tax increases, including most recently a new levy on heavy trucks that mobilised hundreds in the western region of Brittany. Hollande has now deferred but not scrapped the levy.

Valls said Monday's protesters included members of the far-right National Front, whose popularity has risen on the back of widespread public discontent ahead of municipal and European elections scheduled for next year.
© Thomson Reuters 2013