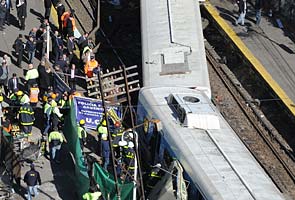 Buenos Aires, Argentina: A train slammed into a bus and then was struck by another train on Tuesday in a massive rush-hour collision at a suburban station that left at least seven people dead and 100 injured, police said.

Firefighters worked frantically to pull people out of the wreckage and rush the injured to hospitals, but they were still struggling to free at least two persons whose legs were pinned, officials said.

"Doctors have confirmed the deaths of seven people, but there still isn't a definitive toll of the victims," said federal police spokesman Fernando Sostre.

The crash occurred at 7 am (1000 GMT) as thousands of commuters were pouring into the Flores station, in southwestern Buenos Aires, on their way to work.

"A train entering Flores station hits a bus from the 92 Line, drags it and smashes it against the platform," said Gustavo Gago, a spokesman for the Buenos Aires train company.

"At that point, the train goes off the track, invading other tracks in its path and is struck laterally by a train that was entering Flores," from another direction, he said.

Firefighters "rescued people who were in the bus, in the train and on the platform," including a two-year-old toddler who was found under the platform, Bravo said.

Sostre said the injured were taken to four Buenos Aires hospitals, which were placed on high alert.

Authorities were investigating reports that the bus driver failed to heed a train crossing signal and breached the lowered barriers meant to signal that it is dangerous to cross the tracks.

Promoted
Listen to the latest songs, only on JioSaavn.com
In February, a long distance train struck a suburban passenger train, leaving four dead and 120 injured.