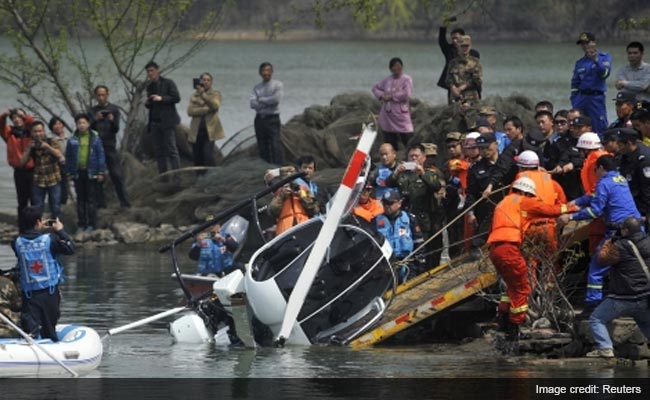 Rescuers pull the wreckage of the small helicopter the businessman crashed into a reservoir in Hefei, Anhui province.(Reuters)

A secret private airport illegally built by a wealthy businessman in China was exposed after he crashed his helicopter, killing a passenger, state-run media said today.

Private aircraft ownership by China's wealthy elite has grown in recent years, but the military controls airspace is reluctant to permit private flights.

A businessman surnamed Li crashed a helicopter into a reservoir when flying in the eastern province of Anhui last week, the Global Times reported.

Li - the chief manager of a construction machinery company who paid over one million yuan ($160,000) for his chopper - swam to safety but a 25-year-old male passenger was killed, it said.

Local reporters found a "hidden" airport nearby, spreading across 20,000 square metres (24,000 square yards) and protected by barbed wire, boasting three helipads and a 400 metre runway, as well as a swimming pool and log cabins, it added.

"Every single wall inside the cabins has planes painted on it and 'flying club' is written at the bottom of the swimming pool," the newspaper quoted a witness as saying.

Private aircraft ownership in China is low compared with other large economies, with just a few hundred said to be registered.

But growing reports of "black flights", as the clandestine trips are known, reveal a wealthy elite paying for the privilege of zooming to work in a plane or helicopter.

The government plans to "open" low-altitude airspace of under 1,000 metres (3,300 feet) nationwide this year, official media have reported, without giving a specific date.

Promoted
Listen to the latest songs, only on JioSaavn.com
Pilots flying illegally in China can be fined up to 100,000 yuan. The Global Times said Li's punishment has not been decided.

It cited local media as saying the airport was declared illegal and will be demolished "within a week".