He is the second cab driver in a month to have burned himself to death in protest at a ride-sharing service created by chat app Kakao. 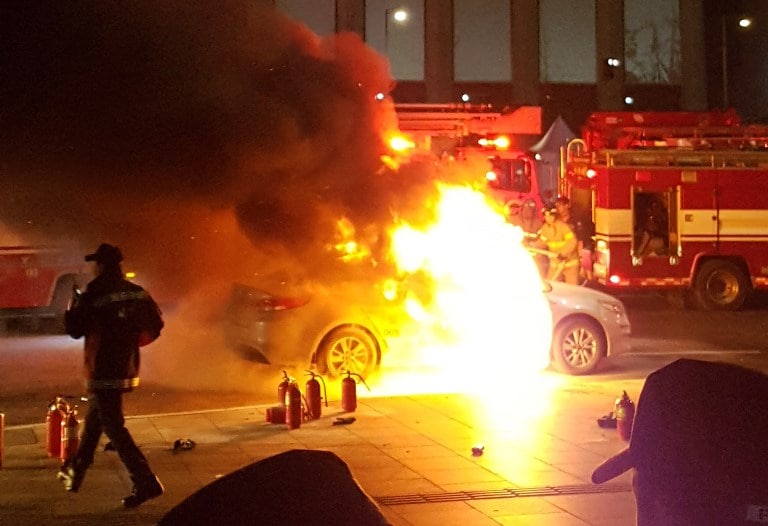 A South Korean taxi driver burned himself to death in protest against a ride-sharing service being introduced by the country's largest mobile chat app, the second to do so in a month.

The 64-year-old, surnamed Im, parked near the US embassy in central Seoul moments before his vehicle was engulfed in flames.

The driver remained conscious after he got out of the burning vehicle on Wednesday evening, witnesses said, and was taken to a nearby hospital but died hours later, according to police, who found melted fuel bottles in the car.

Im left a suicide note, Yonhap news agency reported, calling for a ban on what he called "illegal car-pooling".

He is the second cab driver in a month to have burned himself to death in protest at a ride-sharing service created by chat app Kakao.

Ride-sharing firms have cut transport costs and increased services for passengers around the world, but are conspicuous by their absence in South Korea, where US giant Uber has only a minimal presence.

Uber closed its main ride-sharing service in 2015 amid an extensive backlash from cab drivers and now only offers taxi- and licensed-hire vehicle hailing.

An opinion poll in November found 58.2 of South Koreans wanted to see ride-sharing introduced, with only 12.5 percent against.

The Kakao Mobility scheme, which is currently operating on a trial basis, would allow drivers to provide only two rides a day.

But taxi drivers have protested angrily, saying it would threaten their jobs and livelihoods.

After the first driver suicide last month, Kakao delayed the formal launch of the service, initially scheduled for December 17, citing a need for social consensus on the issue.

(Except for the headline, this story has not been edited by NDTV staff and is published from a syndicated feed.)
Comments
South KoreaKakaoTalkUber