The fox these researchers followed stood out for just how fast it covered more than 2,700 miles - and shed light on far-north fox sightings that explorers wondered about as far back as the 1800s. 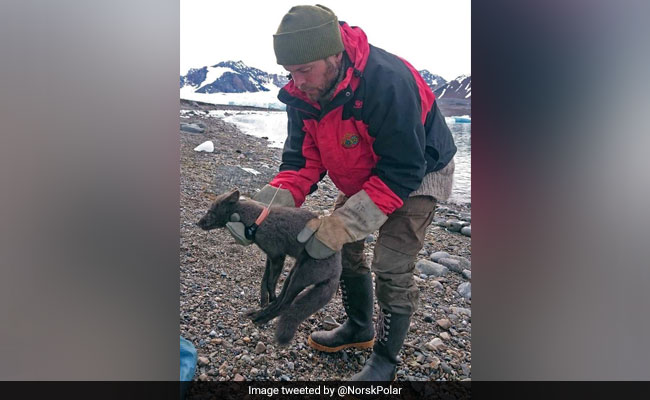 The coastal fox, also known as a blue fox, landed in Ellesmere Island in Canada on July 1, 2018.

At first, the scientists wondered if it was a mistake.

Just 21 days after leaving the Norwegian island of Spitsbergen, an arctic fox had arrived in Greenland. And in less than three months, she made it to Canada. She averaged nearly 30 miles a day - some days, though, she walked almost 100.

"When it started happening, we thought 'is this really true?' " said Arnaud Tarroux, one of the researchers who tracked the fox. "[Was there] an error in the data?"

The data was real, the scientists decided as the fox kept going. The creature's travels last year, documented in a recent paper, wowed Tarroux and his fellow Norwegian researcher Eva Fuglei, even though the animal is known for its endurance and ability to survive in harsh polar areas.

Scientists already knew that some of the foxes, native to Arctic areas all around the northern hemisphere, made long journeys: DNA exchange links far-flung fox populations in areas connected only by sea ice. But the fox these researchers followed stood out for just how fast it covered more than 2,700 miles - and shed light on far-north fox sightings that explorers wondered about as far back as the 1800s.

"We didn't really know how they would do that and how long it would take for an individual to do this kind of trip," Tarroux said.

The coastal fox the researchers tracked, also known as a blue fox, landed in Ellesmere Island in Canada on July 1, 2018. Of the 50 or 60 animals the scientists put trackers on for a study, it was the only one that ventured outside of Norway.

The researchers think the fox may have taken off due to a food shortage, but they're not sure. The tracker stopped working this February, so researchers no longer know the fox's whereabouts, but it was last detected on the same Canadian island in the Nunavut territory.

Another arctic fox has been documented traveling a similar distance, but it made the journey over a longer time period of about half a year. And long treks are said to be more common among another type of the arctic fox, the scientists say. The lemming fox may be more likely to travel amid fluctuations in the lemming populations it depends on for sustenance.

People have been puzzling over arctic foxes' travels for a long time. In 1885, Norwegian explorer and Nobel laureate Fridtjof Nansen marveled at the fresh fox tracks he spied in the snow during his North Pole expedition.

"What in the world was that fox doing up here out on the wild sea?" Nansen wrote, guessing at one point, "Can they have gone astray?"

The modern-day furry wanderer helps answer Nansen's question, Tarroux and Fuglei wrote. The creatures that appear far north are part of a broader pattern of DNA being traded among distant groups, sometimes across continents.

Watching their fox's tracker send back data each day, the Norwegian researchers considered alternate explanations. Could someone else have picked up the tracker? Could it be on board a boat? They were skeptical. But comparing the fox's movements with data on sea ice, they concluded their data was indeed coming from a walking fox.

While not unprecedented, long-distance travel is rare among arctic foxes, according to the scientists. But over many years and among many animals, Tarroux said, those occasional long paths can add up to the sort of genetic exchange that means arctic foxes all around the far north are strikingly similar.

Sea ice is crucial to the journeys - and it's receding in the long term due to climate change, he added, noting that melting ice has left an arctic fox population in Iceland isolated.

"This kind of movement will not be possible in the future if the sea ice disappears," he said.