Saudis Crave Revival Of Night Out At The Movies

The rare movie night this week in Riyadh was a precursor to an expected formal lifting of the kingdom's ban on cinemas, long vilified as vulgar and sinful by religious hardliners. 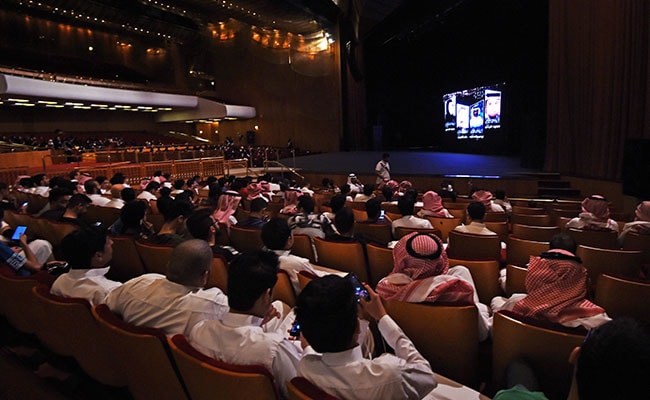 A ban on cinemas does not make sense in the age of YouTube, filmmakers say. (AFP)

Riyadh: The lights go out, the projector whirls and entertainment-starved Saudis sink into plush seats to soak up an experience they have been denied for decades, a trip to the cinema.

The rare movie night this week in Riyadh was a precursor to an expected formal lifting of the kingdom's ban on cinemas, long vilified as vulgar and sinful by religious hardliners.

Following a decree allowing women to drive, authorities have hinted cinemas would soon be permitted as part of ambitious reforms for a post-oil era that could shake up the austere kingdom's cultural scene.

"Cinema is like the soul of Saudi society," said Faisal Alharbi, director of "National Dialogue", one of three short films screened to an audience packed into the capital's King Fahd Cultural Centre.

"It makes people see reality, a reflection of their own lives on screen."

The cavernous hall was segregated by gender at the free screening, the latest in a series of shows since July.

A food truck hawking grilled burgers was parked outside and the audience was offered servings of Arabic coffee in thimble-sized plastic cups.

Once the ban ends, medical student Sultan expects cinemas with all the trappings of the modern movie experience, including vending machines churning out popcorn and cotton candy.

"I expect the movie theatres will be crowded all the time," the 19-year-old audience member told AFP.

Reviving cinemas would represent a paradigm shift in the kingdom, which is promoting entertainment as part of a sweeping reforms plan dubbed "Vision 2030", despite opposition from conservatives.

Hardliners, who see cinemas as a threat to cultural and religious identity, were instrumental in shutting them down in the 1980s.

Saudi Arabia's highest-ranking cleric warned in January of the "depravity" of cinemas, saying they would corrupt morals.

But authorities appear to be shrugging off the threat, with some comparing Saudi Arabia's reform drive to a fast-moving bus, either people get on board or risk being left behind.

Saudi Arabia in recent months has organised concerts, a Comic-Con pop culture festival and a mixed-gender national day celebration that saw people dancing in the streets to thumping electronic music for the first time.

A ban on cinemas does not make sense in the age of YouTube, filmmakers say.

Saudi films have been making waves abroad, using the internet to circumvent distribution channels and sometimes the stern gaze of state censors.

The film depicts the dream of a 10-year-old girl to get a bicycle just like the boys in her conservative neighbourhood.

This year, the country is again vying for an Oscar with the film "Barakah Meets Barakah", the kingdom's first romantic comedy which premiered at the Berlin International Film Festival.

"Saudis need a nuanced cultural identity outside the prism of religion." 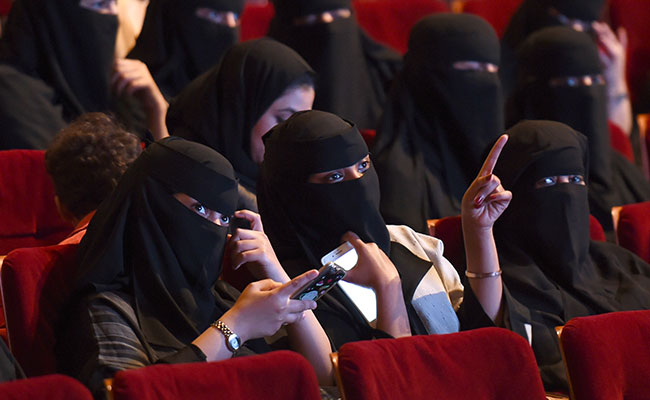 The government is yet to officially announce a date for ending the ban, but already the hashtag "cinemas opening in Riyadh" is gaining traction on social media, as memes swirl online showing people imagining booking their cinema tickets.

The expected reform stems partly from an economic motive to boost domestic spending on entertainment as the kingdom reels from a protracted oil slump.

Saudis splurge billions of dollars annually to see movie shows and visit amusement parks in the neighbouring tourist hubs of Bahrain and Dubai.

Without cinemas, investment in films is unlikely to flourish and the depiction of society will not move beyond the foreign portrayal of Saudis as extremist or culturally primitive, filmmakers say.

Kalthami's film "Wasati", or moderate in Arabic, is based on a real-life event in the mid-1990s when a group of ultraconservatives disrupted a play at a Saudi university.

The film was screened for one night earlier this year at the same theatre where the play was shut down.

Back at King Fahd Cultural Centre, Alharbi's "National Dialogue" was watched by a rapt audience.

The film addresses the social dilemma of young Saudis struggling to find the right match.

It dramatises an encounter in the streets between an unrelated man and a woman, both checking each other out without talking.

They appear to like each other, but in the film's denouement the man rejects the woman, judging her to be immoral after she lifts her veil to give him a glimpse.

Alharbi said the film intended to promote dialogue between the genders, and the screening did just that.

As the lights came on, the raucous crowd of men erupted into cheers. They were vigorously booed by the female audience.

(This story has not been edited by NDTV staff and is auto-generated from a syndicated feed.)
Comments
Saudi movie bantheatres shut downReforms post oil era