In Doha, food shortages and split families are among the "unintended consequences" of the dispute between Qatar and a Saudi-led bloc. 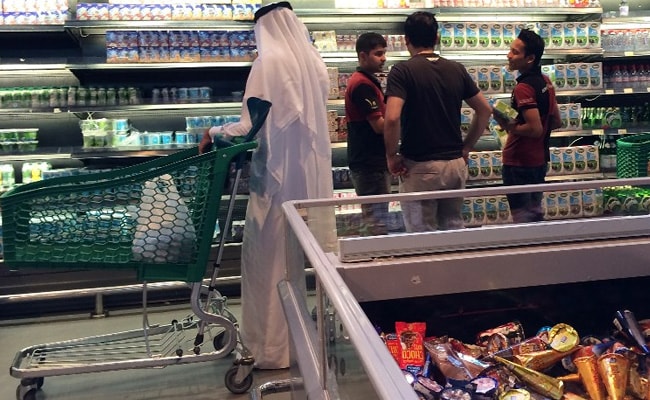 At some Doha supermarkets, there were shortage of foods imported from Saudi Arabia, like milk and yogurt.

Doha, Qatar: Hanan bought extra suitcases on Friday. The Egyptian doctor, who has lived in this energy-rich nation for four years, had already gone to her bank and transferred some of her savings to Egypt. And she went to her children's schools to get their academic records.

She's taking them - and any valuables she can carry - when she and her family fly to Cairo to see relatives in a few days. That's because they may not return.

"All the Egyptians here are feeling unstable," said the doctor, who declined to give her family name because she feared repercussions. "We don't know what will happen. Maybe Qatar will ask us to leave or Egypt might ask us to come back."

It's been a week since several Arab countries - led by Saudi Arabia, Bahrain, the United Arab Emirates and Egypt - severed ties and imposed an economic blockade on Qatar after they accused it of supporting terrorism.

The mood in this waterside Persian Gulf capital is a mix of fear, uncertainty and resilience as residents struggle to cope with a political and diplomatic crisis few imagined would so dramatically upend their world.

On Friday, Secretary of State Rex Tillerson urged the Saudi-led bloc to immediately ease the blockade, saying it has led to "unintended consequences" including food shortages, separated families and children being "pulled out of school."

He added that the blockade was also harming American and international businesses, while "hindering U.S. military actions in the region and the campaign against the Islamic State."

Less than an hour later, President Donald Trump appeared to undermine Tillerson's plea by telling reporters in Washington that Qatar has historically been a "funder of terrorism at a very high level", an accusation Qatar's government has strongly denied.

Members of the Saudi-led bloc welcomed Trump's demand that Qatar end its "funding and its extremist ideology," but they have kept silent on Tillerson's call to ease the economic pressure on the Gulf state. The UAE government in a statement Friday praised Trump's "leadership in challenging Qatar's troubling support for extremism."

Saudi Arabia's official news agency reported Saturday on Tillerson's briefing but made no mention of his description of the blockade as harmful to ordinary residents in Qatar or U.S. business and the fight against the Islamic State.

The Saudi-led bloc has severed links to Qatar - a nation heavily dependent on imports of food and other necessities - by land, sea and air. Member states have also given Qatari nationals living abroad two weeks to leave their countries, as well as for any of their own citizens to return from Qatar.

Human rights watchdog Amnesty International in a statement Friday said Saudi Arabia, Bahrain and the UAE "are toying with the lives of thousands Gulf residents as part of their dispute with Qatar."

"These drastic measures are already having a brutal effect, splitting children from parents and husbands from wives," said James Lynch, deputy director of the group's global issues program. "People from across the region - not only from Qatar, but also from the states implementing these measures - risk losing jobs and having their education disrupted."

"We are worried about losing access to our relatives in other GCC countries," said Walaa El-Kadi, a Lebanese woman who has lived much of her life in Qatar. She was referring to the Gulf Cooperation Council, a body of six Persian Gulf countries that includes Qatar, Saudi Arabia and the UAE.

Mustafa, also from Lebanon, is worried, too. He's a manager in a construction company, which this week has already faced delays in several projects. The firm used to bring raw materials and other goods over the border from Saudi Arabia and the UAE. Now, with the border with Saudi Arabia closed and shipping lanes shut, the company is forced to turn to Germany, India and other nations for raw materials.

Both Bahrain and the UAE have publicly declared it a crime, punishable by multiyear prison sentences, to show sympathy for Qatar or to criticize their governments' policies toward Qatar on social media or any other means of communication.

At several supermarkets, there were some shortages of foods imported from Saudi Arabia, such as milk and yogurt. But the panic-driven long lines and hoarding seen earlier in the week were gone. There were now milk and juice from Turkey, a key ally of Qatar, on the shelves, mitigating the lack of products from Saudi Arabia and the UAE.

Still, there remain some concerns about the future availability of some foods.

"Just now, when I was buying 12 kilograms of onions, they asked me if I really needed that much onions," said Haithem Elgamal, 19, referring to the workers in the Al Meera supermarket.

At Doha's Hamad International Airport, taxi drivers were fuming. Dozens of flights, mostly those of the national carrier Qatar Airways, had been suspended or rerouted. That meant fewer passengers arriving and fewer fares for the drivers. "It's really bad," lamented one.

While some residents fear that war could erupt between Qatar and its neighbors, many Qataris were resilient, even defiant. Some patriotically placed Qatar's flag in front of their houses, and there was a sense the diplomatic dispute could create long-term animosities.

"I will never buy Saudi Arabian and UAE products again," said a Qatari man leaving the Al Meera supermarket. "I will stay loyal to the people who support us now."

Elgamal was born in Qatar, but holds Egyptian citizenship. He said Qatar should remain independent and not kowtow to the demands of the Saudi-led bloc. "I will not leave Qatar even if Egypt calls us back," he said. "This is my first country."

For Hanan, the pressure is building day by day.

Her family and friends in Egypt are sending emails and Facebook messages every day, concerned about her safety.

A lot of her friends have postponed their trips, fearing they may not be able to return. That's why she's carrying her most treasured possessions.

"I could postpone the trip, but I am too scared to stay," she said.

Jia Naqvi in Doha also contributed to this report.

(This story has not been edited by NDTV staff and is auto-generated from a syndicated feed.)
Comments
Qatar Saudi dplomacyQatar blockadeSAudi blockade