Russia's Lavrov To Meet With Donald Trump On Syria Amid Uproar

Sergei Lavrov will visit the White House to discuss Syria with US President Donald Trump amid controversies regarding a Russian hand in the 2016 Presidential election. 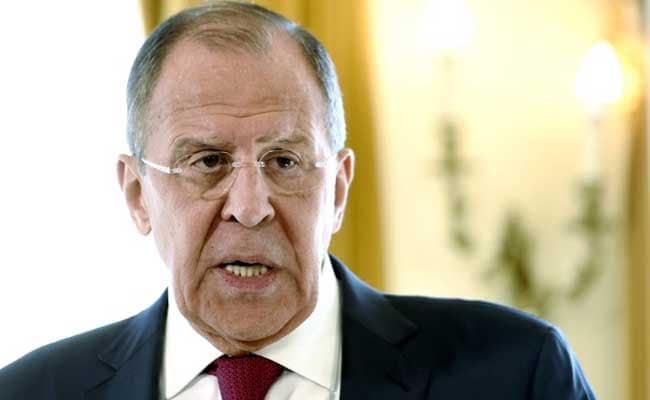 Washington: US President Donald Trump will receive Russia's top diplomat Sergei Lavrov at the White House on Wednesday, even as a political firestorm has put Moscow's alleged meddling in the US election back in the spotlight.

Lavrov's visit, confirmed by the White House late Tuesday, centers on a Russian proposal to de-escalate the violence in Syria's civil war.

But it comes just a day after the president stunned Washington by firing James Comey as director of the FBI amid an investigation into whether Trump campaign aides colluded with Russia to sway the November elections.

The sacking prompted angry Democrats to call for the Russia probe to be placed in the hands an independent prosecutor or commission.

The uproar seemed certain to complicate Lavrov's mission in search of US support for a Russian plan to create safe zones in Syria.

"Just as we do, the Americans need this meeting," Lavrov told Russian television.

Lavrov first holds talks with Secretary of State Rex Tillerson and then goes on to the White House to meet Trump.

Lavrov, who last set foot in Washington in August 2013, would be the highest ranking Russian official to meet with Trump since he took office.

Relations between the two former Cold War foes soured under former president Barack Obama over Russia's annexation of Crimea in 2014 and its unyielding support for Syrian President Bashar al-Assad.

Since March 2011, the Syrian conflict has caused more than 320,000 deaths and forced millions of refugees to flee. Neither Washington, which backs the opposition, nor Moscow, a longtime ally of the Syrian regime, have managed to find a solution to the conflict.

Since the end of Obama's presidency in January, the United States has gradually withdrawn from the diplomatic process, leaving Russia to take the lead.

The US was not part of a deal by government backers Russia and Iran, and rebel supporter Turkey, signed last Thursday in the Kazakh capital Astana on establishing safe zones in Syria.

The agreement calls for the creation of four "de-escalation zones" to shore up a ceasefire, ban flights and allow for deliveries of humanitarian aid.

Washington has given the deal a skeptical welcome, citing concerns about Iran's role as a guarantor even as it expressed hope the agreement could set the stage for a later settlement.

"We will look at the proposal, see if it can work," Pentagon chief Jim Mattis said Monday.

Several ceasefires have been agreed on since Syria's conflict broke out in 2011, but they have failed to permanently stem the fighting.

Over the past six years, Moscow and Washington have sparred multiple times over the conflict in Syria, especially concerning Assad's fate.

Donald Trump's White House takeover has not brought the former Cold War adversaries closer to seeing eye to eye -- and in early April the US even launched direct military action against the Syrian regime in retaliation for a chemical attack for which it was blamed.

Both countries have recently indicated that relations under Trump have never been so bad.

Russia's Deputy Foreign Minister Sergei Ryabkov said Monday that Moscow expected "above all coming to a common understanding on the need for de-escalation in Syria."

"If we manage to find... a common position with the United States on this issue, it will be the most important result," he said, quoted by the state news agency Interfax.

The US State Department said that "on Syria, the secretary intends to discuss efforts to de-escalate violence, provide humanitarian assistance to the Syrian people, and set the stage for a political settlement of the conflict."

Regarding Ukraine, the State Department also said "the sides will discuss the need to stop the violence in eastern Ukraine and resolve the conflict through the full implementation of the Minsk agreements."

After talks Wednesday, the two diplomats will again meet Thursday in Fairbanks, Alaska for the Arctic Council meeting, an intergovernmental forum for cooperation on the environment, oil and mining, shipping, fisheries and tourism.

It brings together the eight countries bordering the Arctic Ocean -- Canada, Denmark, Finland, Iceland, Norway, Sweden, Russia and the US.

Promoted
Listen to the latest songs, only on JioSaavn.com
Tillerson and Lavrov's meeting in Alaska comes 150 years after Washington purchased the US state from Moscow.