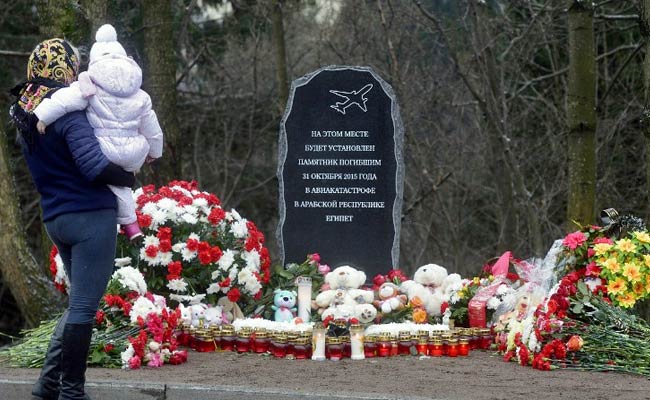 A picture taken on October 31, 2016 in the town of Vsevolozhsk outside Saint Petersburg.

Saint Petersburg, Russia: Relatives of some of the 224 people killed in the bombing of a Russian airliner over Egypt attended ceremonies on Monday in Saint Petersburg to mark a year since the disaster.

Mourners lit candles at a memorial service at the northwestern city's Holy Trinity Izmailovsky Cathedral and held a minute of silence at 7:14 am (0414 GMT), the exact time when the plane disappeared from the radar.

The central Saint Isaac's Cathedral also tolled its bells 224 times, while a memorial concert was set to be held in the city later in the day.

The head of the Russian Orthodox Church, Patriarch Kirill led prayers for the victims on Monday morning in Moscow.

The Airbus plane operated by airline Metrojet was flying from the Red Sea resort of Sharm-el-Sheikh to Saint Petersburg carrying 217 passengers, most of them Russian tourists heading home, and 8 crew members when it crashed in the Sinai desert.

The Egyptian affiliate of the Islamic State jihadist group claimed responsibility for the attack, saying it smuggled a bomb onto the plane inside a soda can.

The commemorations in Russia came after Egypt on Sunday held a ceremony in Sharm el-Sheikh with the Egyptian aviation minister and the Russian ambassador present.

The attack led to Russia halting all flights to Egypt, one of the most popular holiday destinations for its nationals. British holidaymakers also stopped visiting Sharm el-Sheikh, dealing a severe blow to Egypt's tourism industry.

Russia has still not renewed flights to Egypt despite some official discussion.  Pro-Kremlin newspaper Izvestia reported last week that this would not happen earlier than spring 2017, citing industry experts.

Last November, Russian President Vladimir Putin said Russian investigators had found evidence of a bomb on board, and vowed to punish those responsible.

The country's Investigative Committee, which probes major crimes, said Monday that it is "taking every possible measure to identify and bring to justice those who are implicated to various degrees in the deaths of those onboard."

Promoted
Listen to the latest songs, only on JioSaavn.com
On Sunday, in the town of Vsevolozhsk outside Saint Petersburg, relatives and the regional governor Alexander Drozdenko laid the foundation stone for a Garden of Memory which will include the names of all those killed and 224 specially planted trees.

Renowned conductor Valery Gergiev will lead Saint Petersburg's Mariinsky symphony orchestra at a concert in memory of the victims on November 5.