Russian 'Agent' Arrested On Charges Of Seeking To Infiltrate US Government 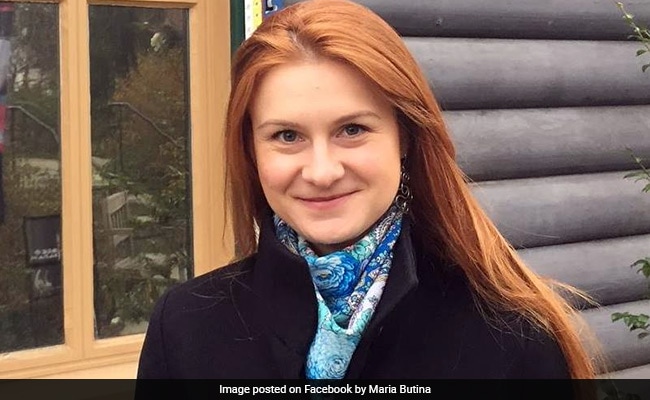 Maria Butina was arrested on Wednesday for conspiring to influence US politics. (File)

A Russian gun rights enthusiast who built a network of powerful Republican contacts under the direction of a Kremlin power-broker was ordered held without bond Wednesday after FBI counterintelligence agents accused her of conspiring to infiltrate the US government.

US prosecutors said Maria Butina, 29, exploited her close links with the powerful NRA gun lobby while posing as a visiting graduate student to endear herself with senior Republicans, guided by one of Russian President Vladimir Putin's major political supporters, Alexander Torshin.

Butina was charged in the Washington federal court with acting illegally as an unregistered agent for the Russian government while she lived in Washington over the past three years with her boyfriend, a veteran Republican operative.

They called Butina a "covert Russian agent" who maintained contacts with Russian spies and pursued a mission "to penetrate the US national decision-making apparatus to advance the agenda of the Russian Federation."

That included offering sex to get a job in a US lobbying group, according to documents filed in court by the Department of Justice.

"This is not a spy case," her lawyer Robert Driscoll said after Butina appeared in court in an orange jumpsuit.

"The government is speculating that someone is a Russian spy, but thousands of Russians met intelligence operatives" in the United States, he said.

Butina's arrest Sunday added to the political turmoil in Washington over Russia's meddling in the 2016 presidential election and allegations that President Donald Trump's campaign collaborated with the Russians.

The arrest was announced Monday hours after Trump finished a summit and a press conference with Putin in Helsinki, Finland, where the US leader rejected the US intelligence community's verdict that the Russians meddled to support him over Hillary Clinton in the 2016 race.

Trump reversed that stance a day later under heavy attack from US politicians of both parties.

She befriended the Republican operative, unnamed in the indictment but widely identified as Paul Erickson, 56, who opened doors to NRA and Republican circles.

Butina began visiting the United States and was regularly hosted by the NRA and other groups, and became a "life member" of the American gun rights lobby.

Pictures of her meeting prominent Republican governors and congressman, and the powerful leaders of the NRA, are splashed across her social media accounts.

In July 2015, Butina was selected to ask Trump a question about his plans for ties with Russia at a rally in Las Vegas.

"I believe I would get along very nicely with Putin.... I don't think you'd need the sanctions," he said, in possibly his first campaign trail pronouncement on the issue.

Her activities ramped up after she moved to the US capital on a student visa in 2016, attending American University graduate school while she lived with Erickson.

Hardly masking her networking efforts, she told colleagues at the school that she had a nearly direct line to Putin.

She helped arrange visits by Torshin and other Russian officials to major political events like the National Prayer Breakfast, as they sought to construct a "back channel" with sympathetic, influential Americans.

Meanwhile Erickson, citing his Russian connections, tried to arrange a meeting between Putin and Trump in early 2016.

And that year Butina reportedly met Trump's son Donald Trump Jr. at a private dinner in Louisville, Kentucky during the NRA annual convention.

The FBI's investigation of Butina began before the probe led by Special Counsel Robert Mueller into possible collusion between the Trump campaign and Russia, and the indictment did not involve Mueller's team.

But the two investigations clearly overlapped, and Butina has already been interviewed by the Senate committee studying Russian meddling.

On Wednesday Moscow said the arrest was a political move seeking undermine the gains of the Helsinki summit.

"This happened with the obvious task of minimizing the positive effect," of the Trump-Putin meeting, said foreign ministry spokeswoman Maria Zakharova.

"There is an impression the FBI is simply carrying out a clearly political order," she said.