Russian police arrested a 37-year-old man who broke the glass covering Ilya Repin's painting of the 16th-century tsar killing his son, damaging it. 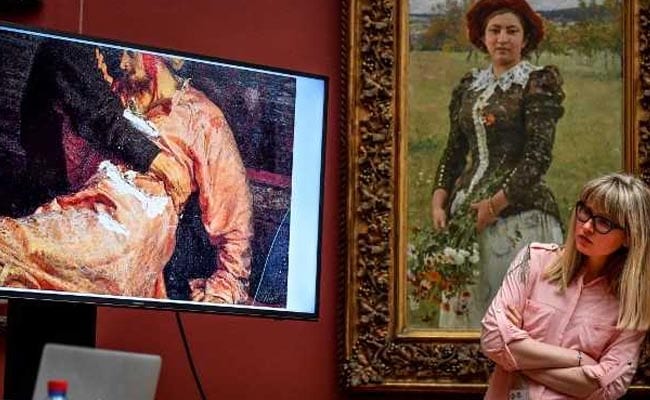 Journalists look at the screen showing the damaged painting of Tsar, titled "Ivan the Terrible" (AFP)

Moscow, Russia: Russia on Monday called for the harshest possible punishment after a visitor to Moscow's Tretyakov Gallery caused serious damage by attacking a famous 19th-century painting of Ivan the Terrible.

On Friday, Russian police arrested a 37-year-old man who used a metal pole to break the glass covering Ilya Repin's painting of the 16th-century tsar killing his son, damaging the work in three places.

Russia's deputy culture minister Vladimir Aristarkhov told a news conference the gallery on Monday that his ministry expects the man to receive "the most severe punishment possible".

Under current law, the man faces up to three years in prison.

"Three years is nothing compared to the value of this painting," Aristarkhov said.

"We would like to initiate a discussion on toughening up the punishment for the vandalism of art," Tretyakov Gallery director Zelfira Tregulova added, speaking in the Repin Room of the gallery where the crime took place.

Russian media said the man -- a builder named Igor Podporin -- vandalised the painting for "historical reasons" and later told police he acted under the influence of alcohol after drinking a shot of vodka.

The gallery's chief conservator, Tatyana Gorodkova, said the man did not appear intoxicated and bypassed four of the gallery's guards before throwing himself at the painting just before the museum closed.

She told journalists museum staff heard him "say something about how Ivan the Terrible did not kill his son."

She stressed that archival letters by Repin prove the painter did not intend for the work to be historical, but rather about "psychological drama."

For her part Tregulova said she feared that Russians are increasingly "not differentiating artistic work from historical facts."

"The mixing of the two can mean that any artwork can be a victim (of an attack)," she warned.

She called the act "a terrible crime against Russian and European culture" and said it exposed "unprecedented aggression" in Russian society.

"People think their point of view is the only one that is correct. They aggressively reject other points of view," she said.

Russia has seen several less serious attacks on art by ultra-patriotic groups in recent years, with many commentators blaming state media and officials for creating an atmosphere of intolerance.

The gallery showed photographs of the damage to the painting, which has been removed from the Repin Room for the first time since it was evacuated from Moscow during World War II.

The pictures showed three large marks on the tsar's dying son. Ivan the Terrible's face and hands, the most striking parts of the painting, were left untouched.

It was not the first time the painting has suffered such an attack.

In 1913, a man stabbed the work with a knife, ripping the canvas in three places. The artist Repin was then still alive and participated in the restoration of his painting.

Since then, the painting has been protected by glass.

Russian state officials have lobbied for the rehabilitation of Ivan the Terrible, who led Russia from 1547 to 1584 and earned the moniker "Terrible" because of his brutal policies including the creation of a secret police that spread mass terror and executed thousands of people.

He also killed his own son, most likely by accident during a violent rage.

In 2017, Russian President Vladimir Putin said the story was a "legend" used by the West against Russia.

"Did he kill his son? Did he not? Many experts say he did not and that this was invented by the pope's nuncio who came to Russia for talks and tried to turn Orthodox Rus to a Catholic Rus," Putin said.

Promoted
Listen to the latest songs, only on JioSaavn.com
In 2016, Russia inaugurated a controversial monument to the 16th-century tyrant, the first of its kind, in the city of Oryol some 330 kilometres (200 miles) south of Moscow.

(This story has not been edited by NDTV staff and is auto-generated from a syndicated feed.)
Comments
Painting Iavn The TerribleTretyakov GalleryIgor Podporin