Man Steals Painting From Russian Gallery, Strolls Out With It Under Arm

The painting was on loan from the Russian Museum in St Petersburg and had not been set up with an alarm. 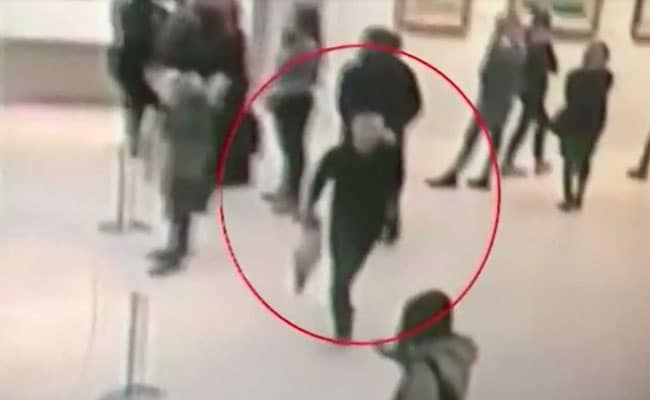 Visitors at the State Tretyakov Gallery barely gave the man a second look, taking him for an employee.

Russian police said on Monday they had arrested a man caught on camera taking a painting off the wall of a major Moscow art gallery and strolling out with it under his arm.

Visitors at the State Tretyakov Gallery on Sunday barely gave the man a second look, taking him for an employee.

It is the second embarrassing incident at the State Tretyakov Gallery in less than a year after a man damaged one of the most famous paintings with a metal pole last May.

"Ai Petri, Crimea", a mountain scene painted by Russian landscape artist Arkhip Kuindzhi in 1908, is worth around $1 million, state TV said, though it was insured for only around $200,000.

It was recovered on a nearby building site undamaged after the suspect admitted where he had hidden it, the police said, although the 31-year-old denied stealing it.

"In a rating of the most stupid crimes of the 21st century, he has grounds to deserve an honourable mention"Culture ministry official Vladislav Kononov said.

Police are looking for possible accomplices in what they are treating as a pre-planned heist of an object of special cultural value, a crime that carries a jail term of up to 15 years.

The painting was on loan from the Russian Museum in St Petersburg and had not been set up with an alarm.

Zelfira Tregulova, director of the Tretyakov, said all temporary exhibits would now be fitted with electronic alarms, blaming the incident on a huge rise in visitor numbers which she said made it harder to track people.

"For us Muscovites this is shameful," Ludmila Gavrina, a visitor said. "Something needs to change."

A spokesman for President Vladimir Putin played down the incident, saying art thefts occur in other countries and noting the painting had been found quickly.

The Ministry of Culture said it had ordered security checks at all of Russia's "top flight" museums.