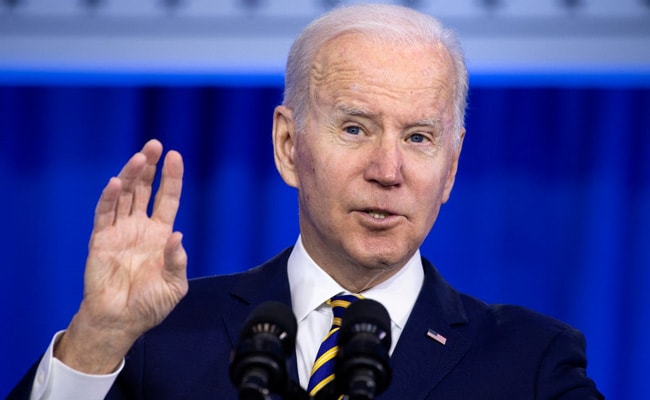 US President Joe Biden urged Americans Thursday to immediately leave Ukraine, as Russia's live-fire drills and build-up of troops around the ex-Soviet state deepened fears of an invasion.

Washington-Moscow tensions are at their highest since the Cold War, with some US estimates saying some 130,000 Russian soldiers are grouped in dozens of combat brigades near the border with Ukraine.

"We're dealing with one of the largest armies in the world. It's a very different situation and things could go crazy quickly."

Biden reiterated that under no circumstances would he send US troops to Ukraine, even to rescue Americans in case of a Russian invasion.

"That's a world war. When Americans and Russians start shooting one another, we're in a very different world," he said.

Biden's remarks were released hours after Russia rolled its tanks across Belarus for live-fire drills that drew an ominous warning from NATO and added urgency to Western efforts to avert war on the continent.

Western leaders have been shuttling to Moscow in an effort to keep the lines of communication open, giving Russia a chance to air its grievances about NATO's expansion into eastern Europe and ex-Soviet states.

But they have also sought to project their resolve in the face of what they is Russian escalation of an already-tense situation.

"Russia should not underestimate our unity and determination as a partner in the EU and as an ally in NATO," German Chancellor Olaf Scholz warned.

In a bid to "reduce chances of miscalculation" during the drills, US and Belarusian defense chiefs held rare telephone talks, the Pentagon said Thursday.

Russia has also sent six warships through the Bosphorus for naval drills on the Black Sea and the neighboring Sea of Azov.

Kyiv condemned their presence as an "unprecedented" attempt to cut off Ukraine from both seas.

Moscow and Minsk have not disclosed how many troops are participating, but the United States has said around 30,000 soldiers were being dispatched to Belarus from locations including Russia's Far East.

Russia's defense ministry insisted the exercises would center around "suppressing and repelling external aggression" and the Kremlin has promised the troops will go home after the exercises.

But Ukraine's President Volodymyr Zelensky said "the accumulation of forces at the border is psychological pressure from our neighbors".

Kyiv has launched its own military drills expected to mirror Russia's games, but officials have said little about them out of apparent fear of escalating tensions.

Russia is seeking written guarantees that NATO will withdraw its presence from eastern Europe and never expand into Ukraine.

The United States and NATO have officially rejected Russia's demands.

Washington has however floated the idea of the sides striking a new disarmament agreement for Europe -- an offer viewed as dramatically insufficient by Moscow.

British Foreign Secretary Liz Truss was the latest Western diplomat to travel to Moscow on Thursday, where she reported receiving promises from her Russian counterpart Sergei Lavrov that the Kremlin had no plans to invade Ukraine.

"We need to see those words followed up by actions," she told reporters after the talks.

But Lavrov said he was "disappointed" by the talks, saying the military drills and the movement of troops across Russia's own territory had spurred "incomprehensible alarm and quite strong emotions from our British counterparts and other Western representatives".

Truss' trip came just days after French President Emmanuel Macron conducted a round of shuttle diplomacy between Moscow and Kyiv, before briefing Scholtz about progress in Berlin.

The German chancellor will travel to Kyiv and Moscow next week for separate meetings with the Ukrainian and Russian leaders -- including his first in-person meeting with Putin.

His position on the new Nord Stream 2 natural gas pipeline from Russia to Germany will be under particularly close scrutiny.

In Washington this week, Scholz had been largely evasive about Biden's pledge to "bring an end" to the critical energy link should Russia invade Ukraine.

The chancellor later said it was a conscious decision "not to publish the entire catalog" of potential sanctions "because we can gain a little bit of power" by remaining vague.

"The number of Russian forces is going up. The warning time for a possible attack is going down," Stoltenberg said at a news conference with Johnson.

"Renewed Russian aggression will lead to more NATO presence, not less," he added.

But Johnson stressed after a meeting with Polish President Andrzej Duda -- one of Ukraine's strongest allies in Europe -- that Western states must "tirelessly pursue the path of diplomacy".