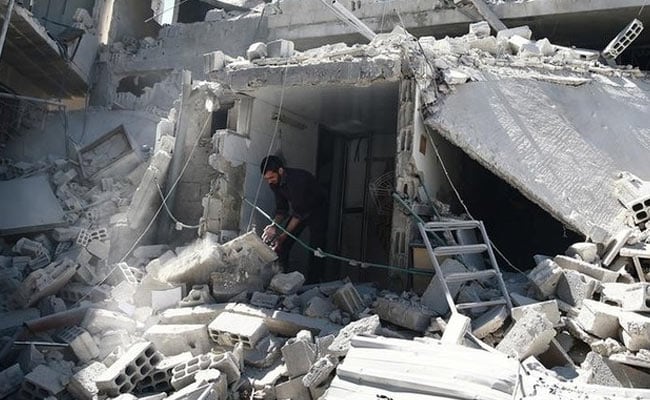 The largest of the four de-escalation zones includes Idlib, Latakia, Aleppo and Hama.

Moscow/ Beirut: A de-escalation agreement in Syria takes effect at midnight but Russia's air force will continue strikes against Islamic State elsewhere in the country, Russian news agencies cited the Defence Ministry as saying on Friday.

The largest of the four de-escalation zones is in northern Syria and includes Idlib province and adjoining districts of Latakia, Aleppo and Hama with a total population of over 1 million, the ministry said.

Iran and Turkey agreed on Thursday to Russia's proposal to establish the de-escalation zones.

But details of the memorandum the three guarantors signed were sketchy, while the main Syrian opposition group said it lacked all legitimacy.

The zones appear intended to halt conflict in specific areas between government forces and rebels, and would potentially be policed by foreign troops.

The fact that the de-escalation agreement was supported by the United Nations, the United States and Saudi Arabia guaranteed its implementation, the RIA and Interfax news agency quoted Deputy Defence Minister Alexander Fomin as saying.

In Washington, Pentagon spokesman Captain Jeff Davis told reporters the U.S.-led coalition in Syria had not altered its operations, but declined to comment on the de-escalation zones.

With the help of Russia and Iranian-backed militias, the Syrian government has gained the military upper hand against rebel groups, including some supported by Turkey, the U.S. and Gulf monarchies.

The government supported the de-escalation plan, but said it would continue to fight what it termed terrorist groups.

Rebels have rejected the deal and said they would not recognise Iran as a guarantor of any ceasefire plan.

The main Syrian opposition umbrella group, the High Negotiations Committee, cautioned against attempts to "partition the country through vague meanings of what have been called ... 'de-escalation' zones".

The Russian-led deal "was concluded without the Syrian people" and "lacks the minimum basics of legitimacy", it said in a statement.

The Riyadh-based HNC, which includes political and armed groups, said it remained committed to the U.N.-led peace process in Geneva and called for its revival.

"This is not the first time," he added, referring to several mediated ceasefires that have unravelled in Syria's multi-sided conflict.

"As long as the jets are bombing civilians, then there are no signs of any ceasefire," Rasheed said. "When they stop, then we can work on political solutions."

(This story has not been edited by NDTV staff and is auto-generated from a syndicated feed.)
Comments
de-escalation agreementRussia's air forceDefence Ministry