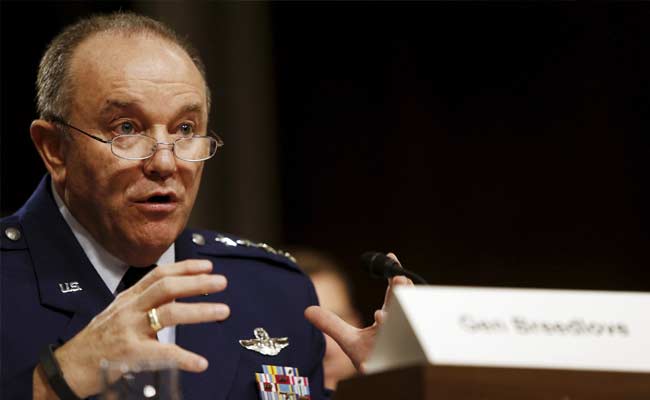 Washington: Russia's military may be taking advantage of a recent lull in fighting in eastern Ukraine to lay the groundwork for a new military offensive, NATO's top commander told the US Congress on Thursday.

US Air Force General Philip Breedlove, the NATO supreme allied commander, said Russian forces had been seeking to "reset and reposition" while protecting battlefield gains, despite a fragile ceasefire agreed in February.

"Many of their actions are consistent with preparations for another offensive," Breedlove said.

Pressed during the hearing, Breedlove acknowledged he could not predict Moscow's next move but characterized its ongoing actions as "preparing, training and equipping to have the capacity to again take an offensive."

"In the past they have not wasted their effort," Breedlove told the Senate Armed Services Committee.

The Organisation for Security and Co-operation in Europe (OSCE), which is monitoring the ceasefire, says the violence is down markedly since the accord was signed in Minsk, Belarus, in February.

But the United States says Russia now has its largest force on the border since October and has deployed additional air defence systems, the biggest number since August.

Breedlove said Russia was seeking to tighten its grip over separatist fighters, bolstering its command and control "because there was disunity in some of the earlier attacks."

"We do see a very distinct Russian set of command and control in the eastern part of Ukraine," he said.

"Command-and-control, air defence, support to artillery, all of these things increased ... making a more coherent, organised force out of the separatists."

The United States has so far declined to provide weapons to Ukraine, a move which advocates say could help end the conflict but opponents warn might escalate the war.

Breedlove said no options should be taken off the table but that there was no consideration of giving Ukraine the kind of military might needed to defeat Russia.

"What we do believe is that we should consider changing the decision calculus of (Russian President Vladimir) Putin. That's what we look at," he said.

Still, Washington is keen to maintain solidarity with Europe, some of whose leaders, including German Chancellor Angela Merkel, strongly oppose arming Ukraine.

Breedlove said Putin was concerned about Western sanctions imposed against Russia over the Ukraine crisis "and that may be affecting how he currently does things in eastern Ukraine."

Promoted
Listen to the latest songs, only on JioSaavn.com
"But we really have no way of knowing one way or another," Breedlove said.