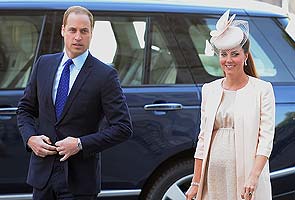 London: Will it be a girl called Alexandra, or a boy called Wayne? No one outside Buckingham Palace knows but it has not stopped punters from around the world betting on Britain's royal baby.

Bookmakers say they expect that wagers on the arrival of Prince William and Catherine's first child will outstrip those for the couple's wedding in 2011, previously the biggest market for so-called novelty bets.

There is a right royal choice of odds ranging from the future monarch's sex, weight and hair colour to even whether Kate will be "too posh to push" and have a caesarean.

"British people love the royal family and so do people around the world."

The big money is on the baby's name, which Crilly said people had been betting on with "full gusto."

Traditional names head the list, led by Alexandra and followed by Charlotte, Elizabeth, Diana and Victoria when it comes to girls' names, and George, James and Louis for boys.

Unlikelier choices include Hashtag, the Twitter term on which Irish bookmaker Paddy Power took a bet at 500/1, and Wayne and Waynetta, after the slobby characters in a British television comedy, at 250/1 and 500/1 respectively.

Punters can also get odds of 5,000/1 on Psy, after the South Korean pop star, or North, the name of rapper Kanye West and Kim Kardashian's new baby.

"We are seeing a tug of war with a quite modern couple like William and Kate on one hand but they have a royal family to appease, 1,000 years of tradition and they don't want to upset the queen," Rory Scott, a spokesman for Paddy Power, told AFP.

Girls' names dominate the odds because punters seem convinced the royal baby will be a girl, after Kate reportedly nearly let it slip during a public appearance earlier this year.

Odds are normally equal for both genders but in this case the odds are nearly twice as long on a male for most bookies.

The most volatile topic is the date of the birth, with several betting companies slashing the odds on the first week of July instead of the expected date of around July 13.

That was partly because of reports that Kate may follow Princess Diana, who gave the press the slip by announcing a later than actual due date when she was pregnant with William in 1981, said Scott.

But bookies said they had not taken many bets on that topic. "Nobody knows when it was conceived, people are just speculating," said Crilly.

Punters are however weighing into other apparently unpredictable matters.

The favourite for hair colour is brown followed by blonde or black, with ginger hair like the new arrival's uncle Prince Harry generally the least favoured.

Meanwhile William and Kate are both equally placed to be the one who holds the baby outside the hospital for the traditional photograph.

The bookmakers said that there was always the risk of an "insider bet" from members of the royal inner circle, with a couple of bets on names raising eyebrows in recent months.

But the betting companies said they were unlikely to close their books even if such bets came in.

"I don't think that would be very good -- we have had some big bets but we will keep them open until the formal announcement," said Alex Donohue of Ladbrokes.

Overall the market is huge.

"We thought the royal wedding last year was the biggest royal betting event but the royal baby will be bigger," said Donohue.

Commonwealth countries and those with large numbers of British expatriates were particularly good for business, Crilly added.

While the figures are smaller than for big sporting events such as the Grand National where a single bookmaker can take &#163;50 million, the growing market reflects the fascination with the British royal family.

Veteran William Hill spokesman Graham Sharpe, who has worked for the company for 40 years, said the first time they had ever taken royal bets was on Charles and Diana's wedding and first child.

Promoted
Listen to the latest songs, only on JioSaavn.com
"Prior to that it was frowned upon, but as soon as Diana joined the royal family everything lightened up a bit. We thought it was time to test the waters as the waters broke, so to speak," he told AFP.

Ironically they then took a hit when a big bet came in a few days before the birth -- on the name William.
Comments
BritainRoyal baby