A dog-like robot could become more common in construction and security settings, its makers say. 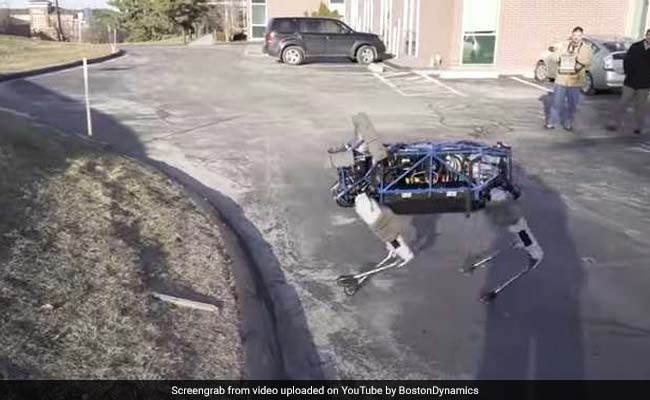 A video posted to YouTube Thursday shows a SpotMini robotic dog running around an office.

They look like they've scampered out of a thriller - sleek, four-legged robots vaguely resembling dogs, flinging open doors and evading attacks from the humans controlling them.

And for the first time this week, videos posted to YouTube by the robotic dogs' creators, Boston Dynamics, show the not-so-cuddly canines prancing around autonomously.

The videos comes just three months after a Feb. 12 video of a robotic dog opening the door and escaping with its friend went viral, sparking headlines such as, "Boston Dynamics' dog robot can open up doors now and WTF we're all dead" and "Robot dogs OPENING DOORS is one of the scariest things you will see all day."

SpotMini robots, first unveiled by Boston Dynamics in June 2016, could become commonplace following CEO Marc Raibert's announcement Friday at a conference that his company will begin selling the robots to businesses next year. They might appear outside construction zones - surveying the sites and collecting building data - or outside offices, where they could use their cameras to provide security. They could also be used to get into hard-to-reach spaces, such as the stairwells of skyscrapers, where they could check for explosives or "bad things" that shouldn't be there, Raibert said.

In fact, the dogs could take on almost any role thanks to a customizing feature that allows third parties to run their own applications with SpotMini's computer programming. About 10 SpotMinis have already been built, and Raibert said he plans to manufacture about 100 more for testing this year before launching mass production by the middle of next year. While a price tag has yet to be determined for the robots, Raibert said the cost of building the latest prototype was about one-tenth the cost of previous versions.

Raibert revealed his plans at the TechCrunch conference, which took place at the University of California at Berkeley and focused on the expanding role of robots in everyday life.

The Washington Post's Alex Horton previously reported that the robotic dogs could prove less nightmarish during a natural or man-made disaster, as they could help navigate situations that would otherwise put people in danger, such as inspecting gas leaks or crawling through rubble after an explosion. According to Horton:

"The SpotMini's bulkier cousin, BigDog, was funded by the Pentagon's research arm as a potential battlefield ally to carry heavy ammunition and help evacuate wounded troops. But the Marine Corps decided in 2015 that BigDog was simply too loud and could give away the position to enemy troops."

A video posted to YouTube Thursday shows a SpotMini robotic dog running around an office, smoothly climbing up and down a staircase. An operator initially had to steer the robot through the course so that it could build its own map of the area. But once that's done - as shown in the video - the robot can navigate entirely on its own, using cameras to recognize obstacles.

In just over a day, the video of the robotic dog dashing up the stairs and bolting around the office on its own racked up more than 875,000 page views, a source of both wonderment and terror.

Pair that video with another one Boston Dynamics released in November of a boxy humanoid robot executing perfect back flips and you have a recipe for humanity's demise, some fear. Among them is Elon Musk, who has said that autonomous machines are more dangerous to the world than North Korea, and has compared the adoption of AI to "summoning the devil."

After watching the video of the bipedal robot achieving back flip after back flip, Musk tweeted, "This is nothing."

Though Boston Dynamics, which is owned by Japan's SoftBank group, did not immediately respond to a request for comment from The Post, the company's website says Atlas is the latest in a line of advanced humanoid robots it is developing.

"Atlas' control system coordinates motions of the arms, torso and legs to achieve whole-body mobile manipulation, greatly expanding its reach and workspace," the company says. "Atlas' ability to balance while performing tasks allows it to work in a large volume while occupying only a small footprint."

"Stereo vision, range sensing and other sensors give Atlas the ability to manipulate objects in its environment and to travel on rough terrain. Atlas keeps its balance when jostled or pushed and can get up if it tips over."

Raibert said people often send him ideas for everyday applications of his company's robots. One idea involves a legged device that could carry people in wheelchairs onto more difficult terrain.

"We get lots of requests for a wheelchair replacement because someone hasn't been able to go out on a hiking trail in their normal wheelchair," he said. "We're not actively working on that yet."

(This story has not been edited by NDTV staff and is auto-generated from a syndicated feed.)
Comments
Robot DogsBoston Dynamics Robot Dogs