Return To Mosul A Distant Dream For Many Displaced

The Iraqi authorities announced victory over the terrorists of the ISIS group on Monday. 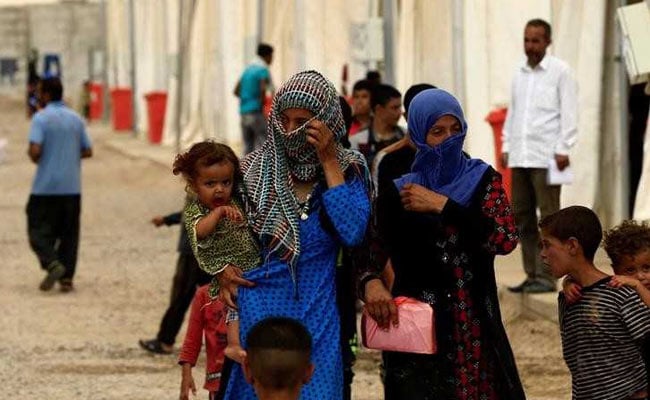 More than a million civilians have fled the violence and more than 8,25,000 have yet to return (Reuters)

Hasan Sham, Iraq: Yassin Najem knows he has to start again from scratch. His home in Mosul has been bombed, and for him and thousands more displaced Iraqis, returning remains a distant dream.

On Monday, the Iraqi authorities announced victory over the terrorists of the ISIS group.

But the unprecedented destruction in the country's second city and the unstable security situation will delay the return home of hundreds of thousands of people who fled.

"My house has been reduced to dust, and half of the neighbourhood has been destroyed," Najem told AFP at a camp for the displaced.

"If I return home, it will be to live on the street," said the 50 year old who has been with his three children in the camp east of Mosul for nine months.

Half asleep as he sheltered under canvas, the widowed former electrical repairman tried to fight the overpowering heat.

The tented alleyways of Camp Hasan Sham were deserted apart from a few children in dusty pyjamas who ventured outside as their parents dozed under canvas or plastic sheeting.

Men who did go outside wrapped their heads in wet towelling.

Nothing to go back to

Since the Iraqi security forces' offensive on Mosul began in October, more than a million civilians have fled the violence and more than 825,000 have yet to return, according to the International Organization for Migration (IOM).

But as some semblance of calm accompanies the end of major combat in western districts of the city, some people are trying to go home.

UN refugee agency UNHCR has warned that many of the displaced will remain so for months, however.

Melany Markham, a spokeswoman in Iraq for the Norwegian Refugee Council, said that while people who fled Mosul may not want to stay in the camps any longer, 'they have nothing to go back to'.

Sitting cross-legged under a tarpaulin at the entrance to her tent, Safaa Saadallah was sceptical to hear her 26 year old son, a former professional handball player, talk of returning home to Mosul.

"To go where?" asked the 69 year old, a black scarf placed loosely over her hair.

"We have no house, no business and not enough money to pay rent. How can we go home?"

It is now eight months since she fled the city with her two sons, daughter and two grandchildren.

The home in which she had lived for 30 years was requisitioned by IS and later destroyed in an air strike.

"We just sit here all day and pour water on our heads" to try to cool down, she said.

"Other camps have installed air conditioners in tents, but here we have not had anything."

There were also delays in distributing food aid to the camp's residents, she added.

Arnaud Quemin, interim director of the US NGO Mercy Corps for Iraq, said "a classical pattern of back and forth" awaits those displaced by the battle for Mosul.

"Some people will go back to see if their houses are in good shape or not, if they need to be rebuilt, and once things are set up they will bring their family with them," he said.

"This is going to be a very long process. We are dealing with numbers that are absolutely without comparison to a lot of other crises of the same kind."

At Camp Hasan Sham, at the entrance to one tent, 10 day old baby Hamad slept fitfully on a cushion in a crate of vegetables.

To protect him from the heat, his parents had covered him with a wet pink towel.