Watch How A Collapsed 4,500-Tonne Italian Bridge Was Blown Up In Seconds

The motorway bridge in the Italian city Genoa collapsed nearly a year ago killing 43 people. It was demolished on Friday to make way for a new structure. 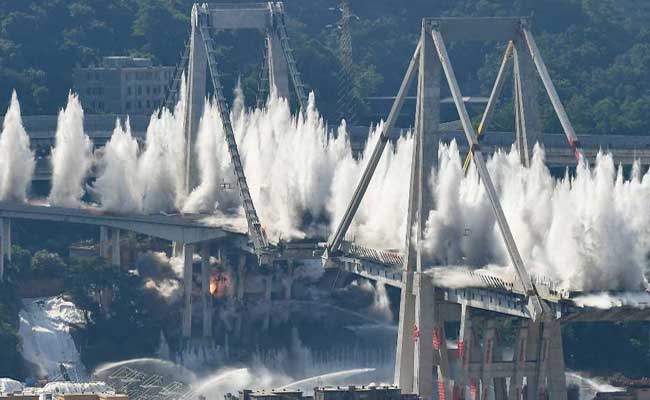 Explosive charges blow up the eastern pylons of Genoa's Morandi motorway bridge on in Genoa. (AFP)

The two remaining towers of the motorway bridge in the Italian city Genoa that collapsed nearly a year ago killing 43 people were demolished on Friday to make way for a new structure, authorities said.

The remains of the 4,500-tonne Morandi bridge were detonated at 9:37 am (0737 GMT) and took just seven seconds to collapse in a cloud of dust, city authorities said.

Nearly 4,000 residents had been evacuated ahead of the demolition, and water tanks were placed around the towers to prevent the spread of dust.

Some 400 security forces were also deployed to the area. 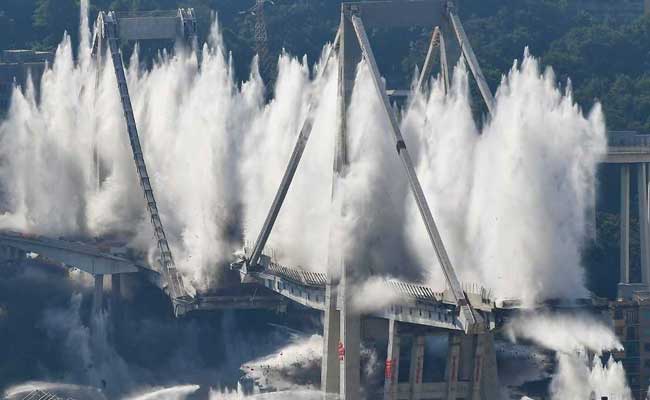 The pair had spent several days at the site when it collapsed in bad weather on August 14, 2018, striving to outdo one another in indignation and what action to take in the aftermath of the incident.

The dismantling of the bridge's remains started in February.

Ahead of the demolition, residents expressed relief that the eyesore would finally be gone but were also concerned about the possible consequences of the detonation. 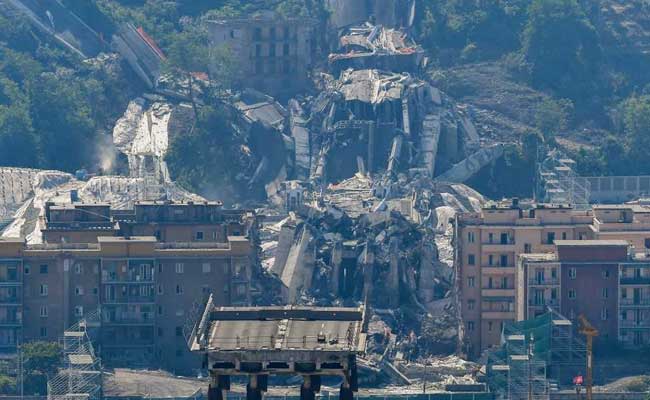 The bridge's deck lies in debris and rubble among evacuated buildings. (AFP)

The bridge "is high, it is big, it is full of iron, it is super heavy... I don't know what will happen when it falls. Apart from the dust it will cause, I am worried about the impact," local Francesco Russo had told AFP TV on Thursday.

With the demolition over, officials are now waiting for the arrival of a ship transporting the first parts of a new bridge, the construction of which is scheduled to begin next year.

The government has promised that the new steel and concrete motorway bridge, designed by Italian architect Renzo Piano, will be open for traffic in April 2020.

(Except for the headline, this story has not been edited by NDTV staff and is published from a syndicated feed.)
Comments
Genoa Bridge CollapseItaly bridgedemolished