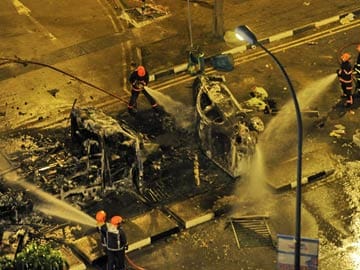 Firemen douse a charred ambulance and a car after a riot broke out in Singapore.

Singapore: A crowd of around 400 people set fire to vehicles and clashed with police in the Indian district of Singapore late on Sunday after a man was hit and killed by a bus, the first major riot in the city-state for more than 40 years. (See pics)

Police said they had arrested 27 suspects after the riot, which started after a private bus hit and killed a 33-year-old Indian national in the Little India area.

The riot is likely to fuel concerns about discontent among low-paid foreign workers. Last year, Singapore saw its biggest outbreak of labour unrest in years when around 170 bus drivers from mainland China went on strike illegally.

Several videos posted online showed a crowd of people smashing the windscreen of the bus while the victim remained trapped under the vehicle.

Police said the 27 arrested were of South Asian origin and that they expected to make more arrests in coming days. About 300 officers were sent on to the streets to quell the riot.

A statement by the Civil Defence Force (CDF), which oversees ambulances and fire fighting, said rescuers trying to remove the body had "projectiles" thrown at them when they arrived on the scene.

Footage showed police cars being flipped over and several vehicles on fire. The CDF said an ambulance, three police cars and a motorbike were burnt.

"Shortly after, a riot broke out involving a crowd of about 400 subjects", it said in a statement, adding that around 10 police officers were injured.

Singapore Police Force Commissioner Ng Joo Hee said: "As far as we know now, there was no Singaporean involved in the riot."

"The unwanted violence, rioting, destruction of property, fighting the police, is not the Singapore way," Ng said.

Little India is usually packed with people on Sundays, with many construction workers from Bangladesh and India gathering there to spend their day off.

Singapore has not seen a riot of this scale since 1969, when Chinese and Malay residents clashed violently. The country has tough laws on rioting that carry a sentence of up to seven years in prison and possible caning.

"Whatever events may have sparked the rioting, there is no excuse for such violent, destructive, and criminal behaviour. We will spare no effort to identify the culprits and deal with them with the full force of the law," he wrote.

The riots came on the same day that Singapore's ruling political party adopted a new resolution, the first since 1988, about its social aims.

The eight-point mission statement from the People's Action Party included a resolve to strengthen the Singaporean identity where people of different races, religions and backgrounds "live harmoniously together, embrace one another as fellow citizens and work together for a better Singapore".

Footage on Channel NewsAsia showed several vehicles in flames and debris strewn across Racecourse Road, one of the main thoroughfares in Little India. Many other private cars were reported to have been damaged as well.

Police said they had the incident under control within an hour of receiving their first call.
© Thomson Reuters 2013
Comments
SingaporeLittle India